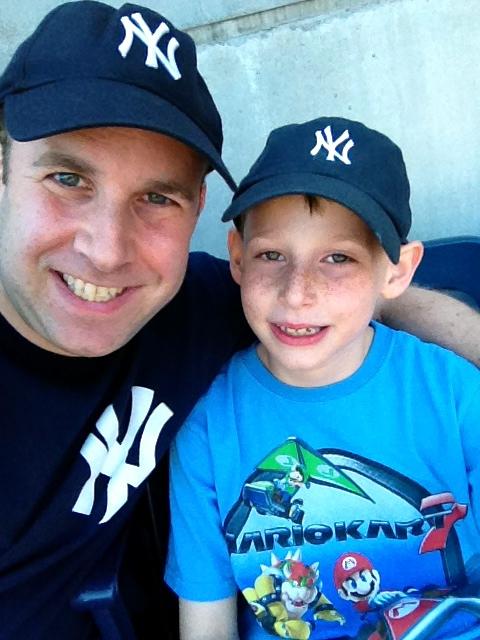 Yesterday, I took Jason to Yankee Stadium for the Yankees/Blue Jays afternoon game. We got tickets from my brother-in-law Steve, so we met him and his son Matthew at the stadium. (We recently had Steve’s daughter Amanda over for a sleepover if you remember. We just can’t get rid of these guys…)

The day started with us getting to the train station just in time to catch an earlier train than expected! Bonus! Except… we soon realized that the earlier train was still in the station because something was mechanically wrong with the doors. So we sat in the train for a good 15 minutes until it finally took off. In hindsight, we should’ve waited for the other train since it was an express (20 minute ride). The busted one we were on was a local and took 37 minutes to get to the stadium.

Anyways, we arrived at the stadium and quickly found our seats in the Jim Beam suite area. Real nice super cushy seats in the 3rd tier, but right behind home plate. So a little high up but great vantage point. The best part of these seats, though, is that you have access to the Jim Beam suite which was off near the concession areas.

Steve and Matthew hadn’t arrived yet, so Jason and I went over to check out the exclusive suite. It just so happened to be Family Day so it was extra cool. There was face painting, balloon animals, and a guy doing caricatures. Plus, we could help ourselves to free pizza, chips, Cracker Jacks, juice, and mini Yankees helmets filled with candy. Jason only had eyes for popcorn.

On regular days, the suite offers free popcorn (bags full) and peanuts, as well as free refills on soft drinks. So I stuffed my face with a few slices, grabbed a soda, got Jason his popcorn and we headed back to our seats.

Steve and Matthew were there and we quickly jumped into the game. I won’t bore you with any details, other than to say the Yankees sucked big time. A lot of their key players were injured. A bunch of their backup players were injured. So there were a handful of 3rd stringers in the lineup I had never even heard of. They ended up losing 8-5. And while the Yanks kept it close for most of the game, all those errors and stranded runners made for a painful game.

The weather, however, could not have been more gorgeous. And our seats were perfectly just in the shade too. So we all just watched the game, eating and chatting away.

Matthew is 13 years old, and a huge baseball history buff so we spent a lot of the game just chatting about various baseball records. He can not only tell you the winner of every single World Series ever, but he can probably tell you the weather report from each game, as well! In fact, he started his own baseball history blog called Baseball With Matt, so if you’re a baseball trivia buff, definitely check it out!

The game itself may have been a bust, but I had such a blast. I got to take a day off work and spend it with my oldest son watching a ball game. He may not have thought much of it, but it’s certainly a memory I’ll treasure. We even made it to the huge Jumbotron when we spotted the cameraman in our row. The kids were so excited they wanted me to pick up some youth baseball bats so they could start playing

My favorite moment, though was when we started to head back home. (No, not because the painful Yankees loss was over. Settle down, Red Sox fans.) But while waiting for the train on the way home, he jumped up on a lamppost and started playing “you can’t catch me.” His eyes were lit up and he had this enormous grin on his face as he kept swinging from side to side on that lamppost.

It was really just a perfect ending to a near-perfect day. Yeah, a Yankees win would’ve put it over the top. Just wait until next time…