Things are starting to heat up for one Tony Stark. And I ain’t just talking about his jet boots! Zing!

Iron Man 3 hits theaters on May 3 (Jason’s birthday!) and the big marketing push is fully underway. There have already been a bunch of trailers and a movie poster. But Marvel Films has now officially released five new Iron Man 3 movie posters.

I don’t know much about the plot of Iron Man 3 other than the fact that the Mandarin is the villain and lots of things get blown up.

Here’s the official lowdown on the third movie in the metallic franchise:

Marvel’s “Iron Man 3” pits brash-but-brilliant industrialist Tony Stark/Iron Man against an enemy whose reach knows no bounds. When Stark finds his personal world destroyed at his enemy’s hands, he embarks on a harrowing quest to find those responsible. This journey, at every turn, will test his mettle. With his back against the wall, Stark is left to survive by his own devices, relying on his ingenuity and instincts to protect those closest to him. As he fights his way back, Stark discovers the answer to the question that has secretly haunted him: does the man make the suit or does the suit make the man?

Hmmm. Let’s break down each movie poster individually to see if it’ll give us any hints about the movie. Grab your popcorn, 256 oz. cup of Coke Zero, and movie-sized box of Sno-Caps, and follow me… 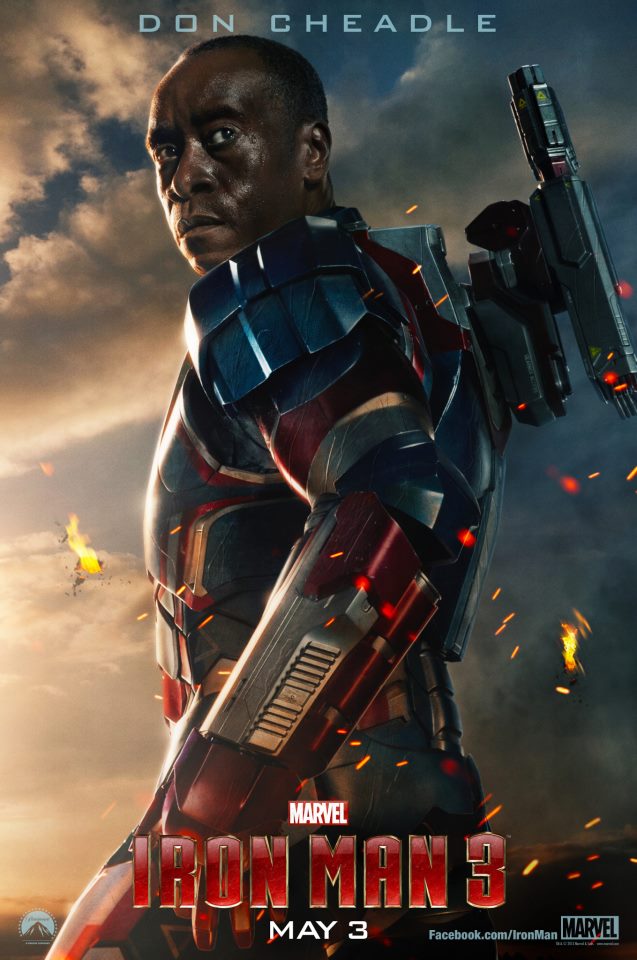 Let’s start with War Machine. Last we saw him, Rhodey was wearing a souped-up Iron Man suit, helping Iron Man take down Whiplash. Looks like War Machine’s gone all Captain America with a patriotic paint job. Not sure why his helmet’s off since things are exploding all around him. Is that another suit of armor blowing up in the sky? Or perhaps an airplane? Oooh, maybe War Machine’s the one who blew all that stuff up in the first place. Yeah, that’d explain why his helmet’s off and he’s just standing there. Clearly War Machine’s the bad guy in this movie, who goes around gunning down innocent airplanes. What a twist! 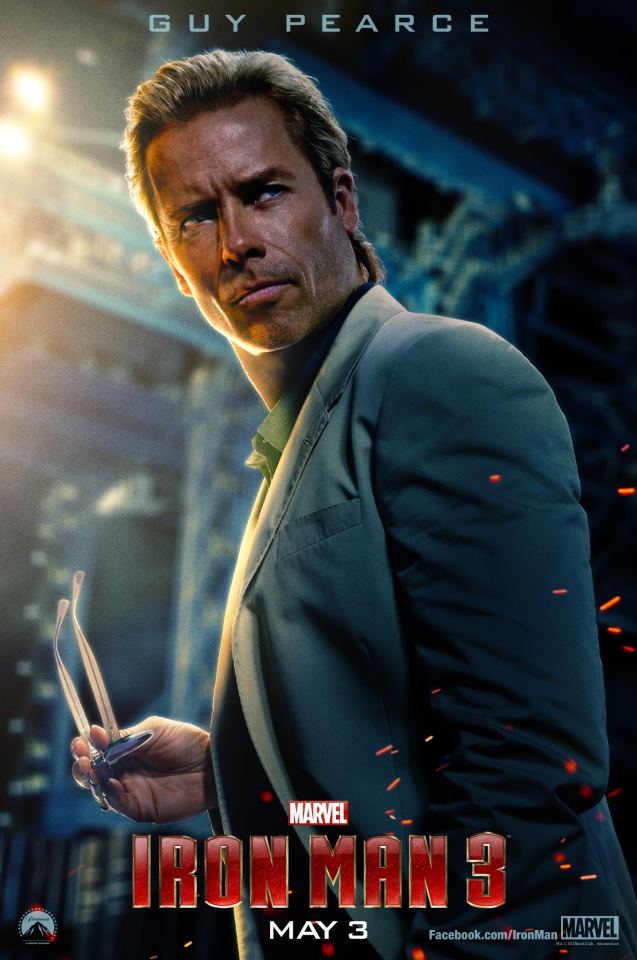 Next up is Guy Pearce. At first glance, I thought he was going to play grumpy Government Liason Henry Peter Gyrich. It’d make sense, since SHIELD needs to replace the (SPOILER ALERT FROM THE AVENGERS MOVIE!) awesome Agent Phil Coulson who met his match (or rather, met Loki’s pointy stick) in the Avengers movie. But no. according to the IMDB, Pearce is playing Aldrich Killian, some scientist who deals with nanotechnology.

I don’t know about you, but Pearce looks way too much like a pretty boy to be a scientist. Something fishy’s going on. Maybe he eats a nanotech sandwich and turns his whole body into a living Iron Man. And there’s more of those red sparks flying around. Wonder what those are for… 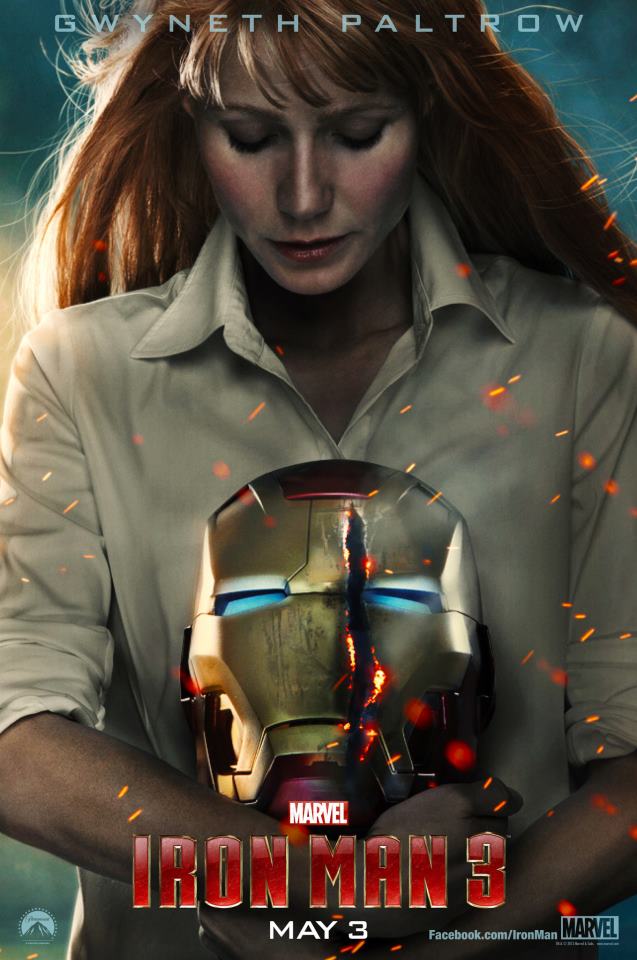 Oh, sweet, sweet, Gwyenth. I mean Pepper. My wife loved the first two Iron Man movies but she despises Gwyeth Paltrow in this role. “She can’t act” is all she keeps saying anytime Pepper Potts makes an entrance. I have no problem with Pepper, other than the fact she can use a few more freckles.

Now here she is holding Iron Man’s head. The key here besides the giant gash in the helmet, is that the eye slits are lit up. To me, that means the head is still attached to Iron Man’s body, you just can’t see it because it’s off the bottom of the poster. But what exactly is Pepper doing? Is she about to put the sleeper hold on Iron Man? Or perhaps she’s been mind-controlled by Guy Pearce! He totally lost his mind (and memory) in the awesome film Memento, so maybe he’s channeling his character from there and forcing Pepper to play head games with Iron Man.

Not sure what to take away from this other than the fact that Pepper’s in the movie. 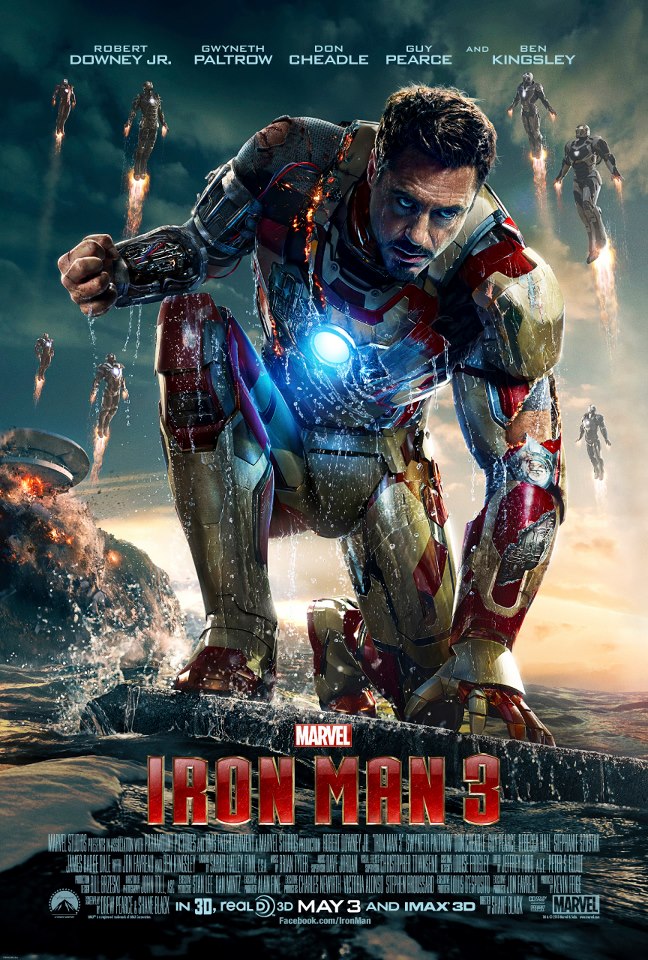 Now we’re getting somewhere! Tony looks ticked off. Like seriously pissed! Probably because his helmet was ripped off his body. Oooh, maybe that’s why Pepper’s holding it!!!

So there’s a whole bunch of armor flying up in the sky. Since we know Rhodey’s dressed in the Captain America War Machine outfit, and Tony really doesn’t have any other friends, we can only assume that those other armor units are being controlled by someone else. Someone… evil!

In the background, you can make out Tony’s gorgeous house up on the cliff, which looks to be undergoing just a bit of remodeling. But why on Earth is Iron Man surfing at a time like this? 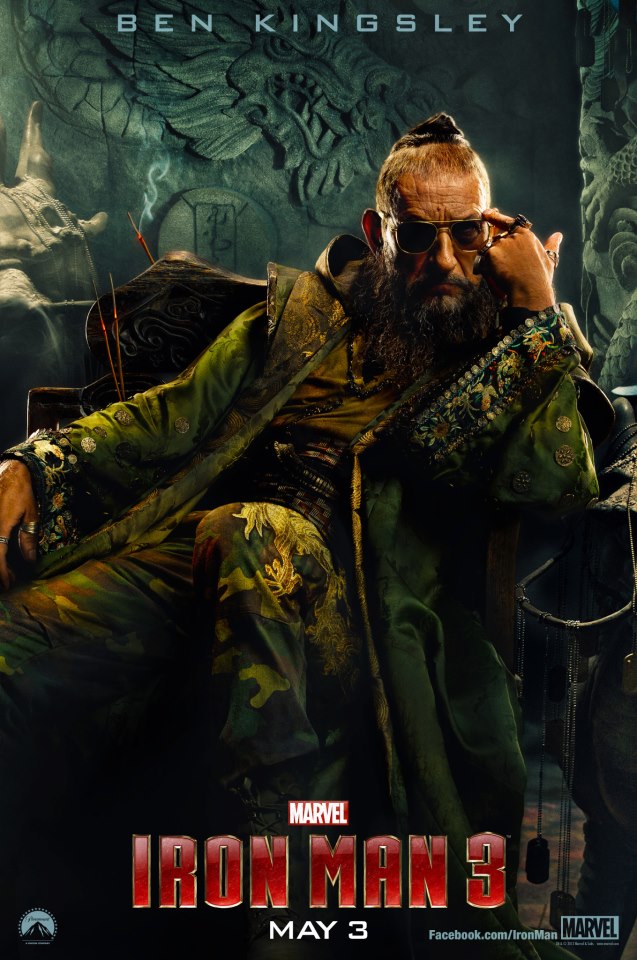 And now we come to our final poster starring the uber-talented Ben Kingsley. This is the guy who played Gandhi, for crying out loud. The most peaceful person on the planet like ever. And now he’s playing a super-duper evil mastermind who probably kills zillions of people? Talk about stretching your acting chops.

In the comics, the Mandarin is an Asian villain with super-powered rings. Each ring has a different power like one shoots fire, the other ice, one acts like a bottle opener, you get the picture. I’ve heard the rings in the movie don’t have powers but they do have some sort of meaning. I like how you can see dog tags hanging at the Mandarin’s side. I wonder if they’re his (former army brat gone bonkers?) or if he collects them from soldiers he’s killed.

Mandarin clearly has a love of the Orient, as he dresses in Chinese robes and decorates his… er, cave (?) with Chinese dragons and symbols. He also digs sunglasses which just make him look cool, don’t they?

Not much to gleam from this poster other than the fact that the Mandarin looks quite chill and relaxed. He’s clearly a big thinker, rather than a fighter. Should be an interesting match up against Tony Stark.

So now that we’ve made our way through this series of posters what have we learned about Iron Man 3? Yeah, pretty much nothing. Other than the fact that I can’t wait to see it. I’m hoping to take Jason and his friends on opening day, in celebration of him turning 10. Jason that is, not Iron Man. He’s a lot older than 10. Iron Man Assemble!

Who else is pumped to see Iron Man 3?