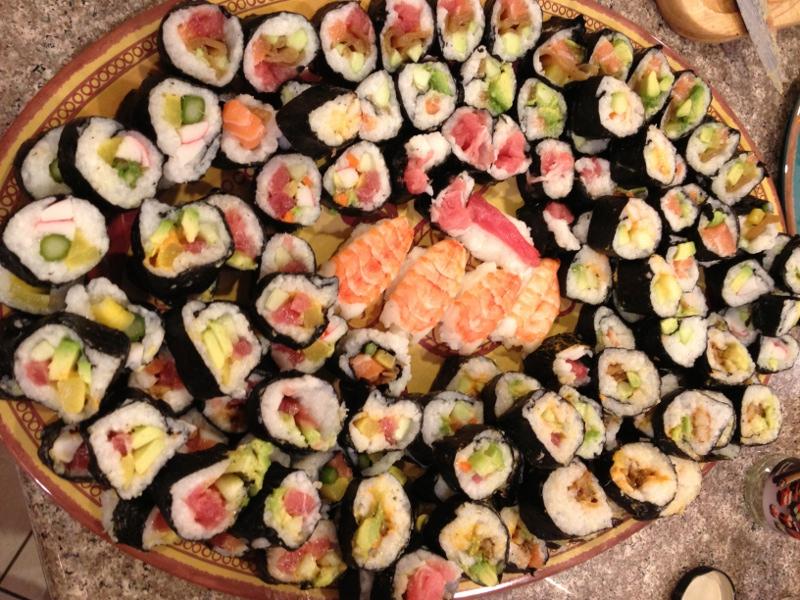 This weekend we got together with our family friends The Tatars to introduce them to the fine art of sushi making. Our kids get along great (how rare is that where the parents AND kids all get along with everyone in another family?), so while they were all off playing Super Paper Mario Kart Party or whatever, we dove into dinner!

Allie and Stacey drove down to Mitsuwa Marketplace in Edgewater, NJ. It’s about 40 minutes away but it’s worth it. This place is a full-fledged Japanese marketplace, so it’s great to pick up sushi-prepped fish, as well as any crazy ingredients you may need like oshinko (that yellow pickled radish) or kampyo (the super sweet Japanese squash).

The ladies went to pick up the ingredients while Eric and I stayed behind to shoot some pool. I mean, to watch the kids. And uh, prep the vegetables. So we cut up long strips of cucumber (I remembered to scoop out the seeds first!), carrots, and asparagus spears. We finished that rough work just in time as Allie and Stacey returned with all sorts of goodies!

Allie’s all smiles with the catch of the day!

Eric and I love unagi (eel), and the girls actually found some for us! I’ve never made my own eel sushi before so I was pretty excited! Bonus: This was Conger eel! I grew up right near a town called Congers. I wonder if I can go hunt me some eel… 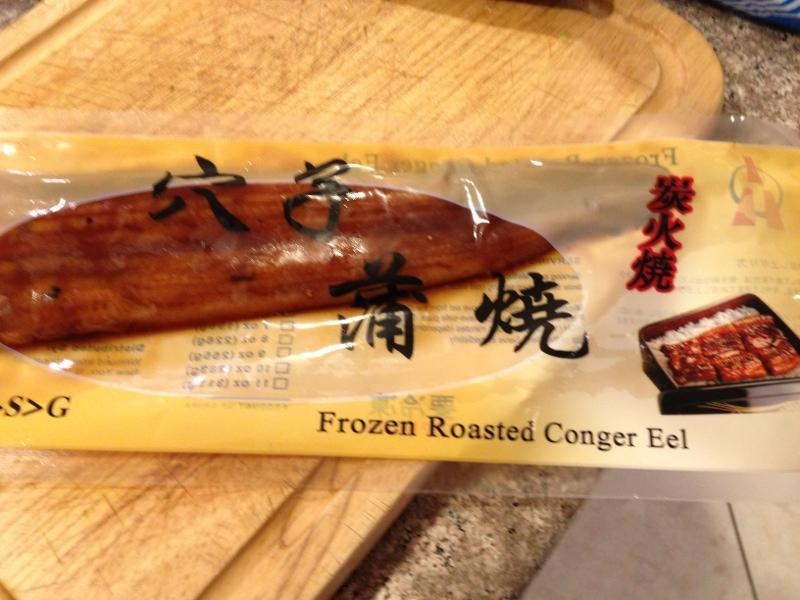 Stacey and Eric show off some snacks. Gotta love those seaweed-wrapped crackers. But, what’s that in Eric’s hands?

No. That’s not? Is it? Why, yes it is. It is Dried Boiled Anchovies. Who’s up for a taste? 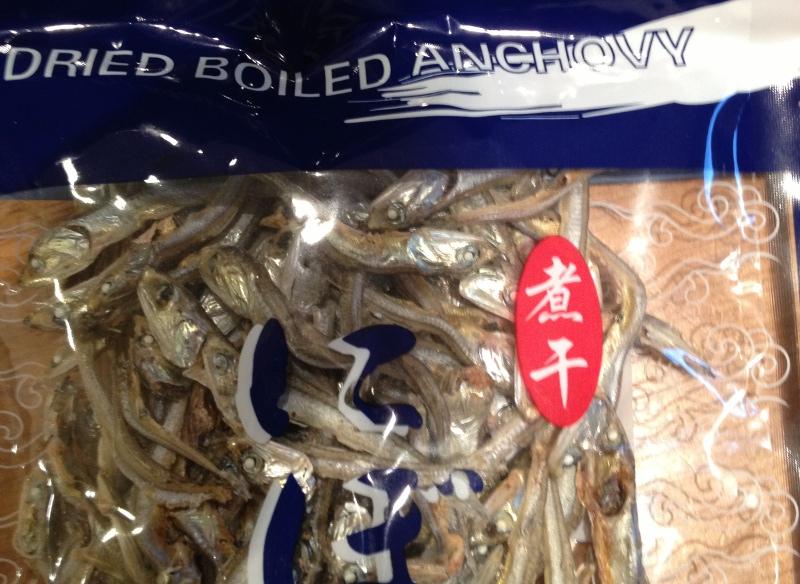 How do you say “barf” in Japanese?

We also wanted to make Miso soup for dinner, so while the rice was cooking (we really need to buy a rice cooker), we dove into the soup! First you need to boil some water. Then it’s all about scooping in the Miso paste. It’s a very scientific process. (Yeah, we just kept adding scoop after scoop until it tasted like something other than water.)

Then we diced up some onions. Not sure exactly why Eric’s doing a Hawaiian “Hang Loose” sign as he dices up the tofu. Surfers must love their soybeans.

After adding in some dried mushrooms, wakame (Japanese seaweed), and some yam noodles (they’re like super thin spaghetti), we let everything just simmer for a bit.

Next up is to prepare everything for the sushi rolling. As the rice was finishing up, we sliced up the Japanese veggies, plus a few avocados. In keeping with Japanese tradition, we put everything neatly on a platter. It is all about presentation after all.

Then it was time to slice up the fish! I could not wait to get at that eel before it got at me! 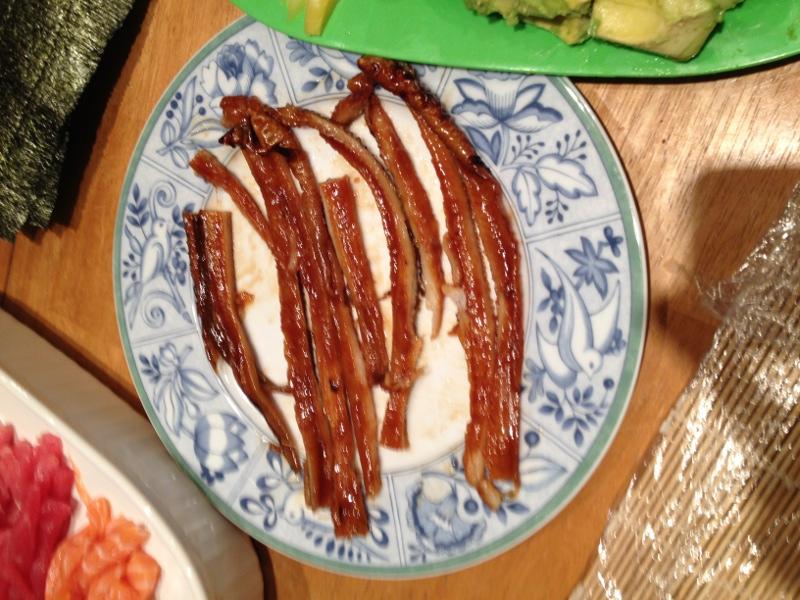 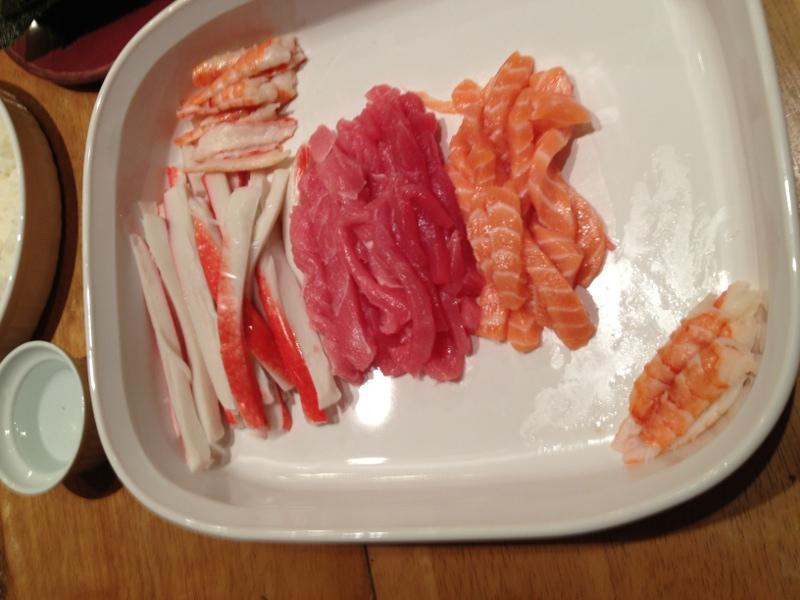 With our ingredients all prepped and ready for us, it was finally time to get rolling!

This would be one of those “before” type photos.

Stacey watches on as her daughter Sophie prepares to make a California Roll! (It was delicious, Sophie!)

Stacey told me not to mention that she needed a fork because she just doesn’t like to touch the slimy fish with her own hands. So, uh, yeah. I won’t mention it. 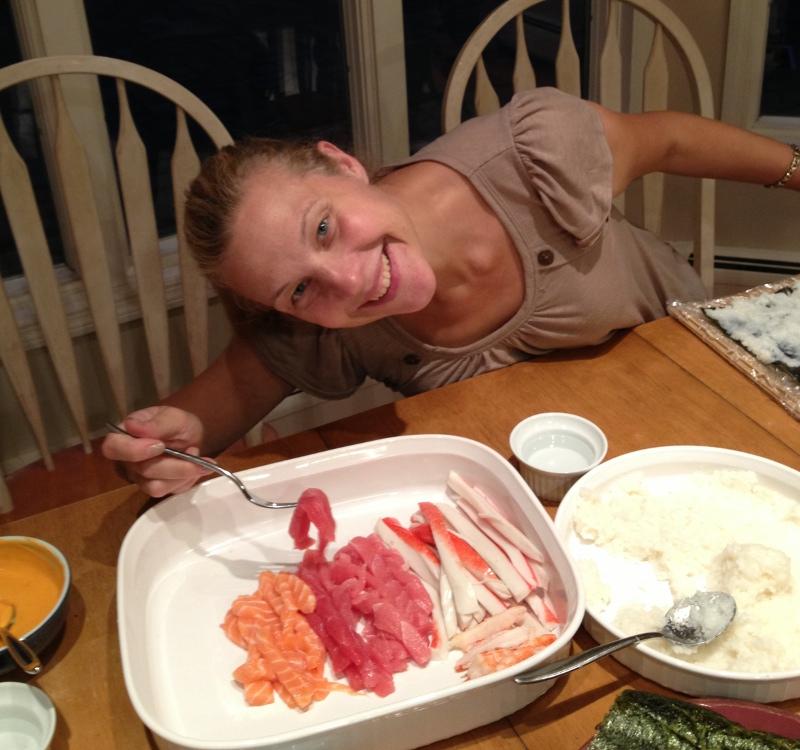 We all sat at the table and mixed and matched fish and vegetables, even adding in our own spicy sauce on some rolls. Since Allie made sure to pick up some cooked shrimp, I just had to make a few normal sushi pieces with it. Not wanting to be outdone, Eric took a stab at making a piece of Tuna sushi. I think he probably could’ve gone with a “slightly” bigger piece of tuna, or about 90% less rice. When we were done, we piled up the rolls on two plates. 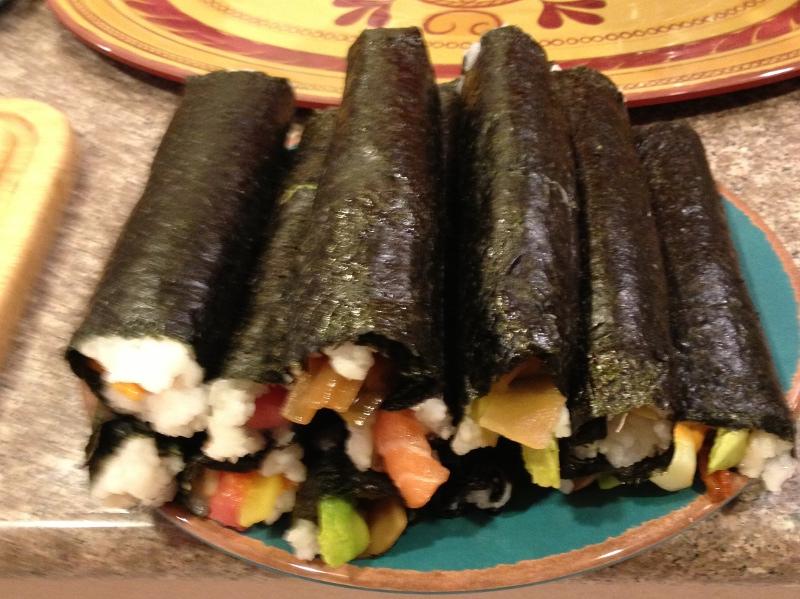 Now, I’ll be the first to admit I’m not very good at rolling. Allie is quite excellent, though. I usually over stuff or rip the nori sheets and make a total mess of my rolls. Though I think I did pretty good this time around.

I will admit that I am quite good at cutting the sushi though. So I grabbed the 15+ rolls we made (yowza!) and got to slicing. I was seriously impressed how nice a lot of these pieces came out. Take a look!

While it was only four of us eating, I’m still not sure we made enough rolls.

We ended up eating maybe 1/3 of what we made. We also had some frozen gyoza we cooked up to nibble on, along with the miso soup we made. We certainly gave it our all. Everything tasted great, I have to say. The tuna was perfect. The eel wasn’t bad, but it’s so much better in restaurants with the eel sauce. So next time we either get some eel sauce or skip the eel I say.

In the end, we tossed a ton of pieces out since they contained raw fish. We kept any all-veggie rolls though and ate those the next day for leftovers! All in all, it looked great, tasted great, and we had a total blast making them. I can’t wait to do it again!

Thanks again to the Tatars for hosting sushi night! 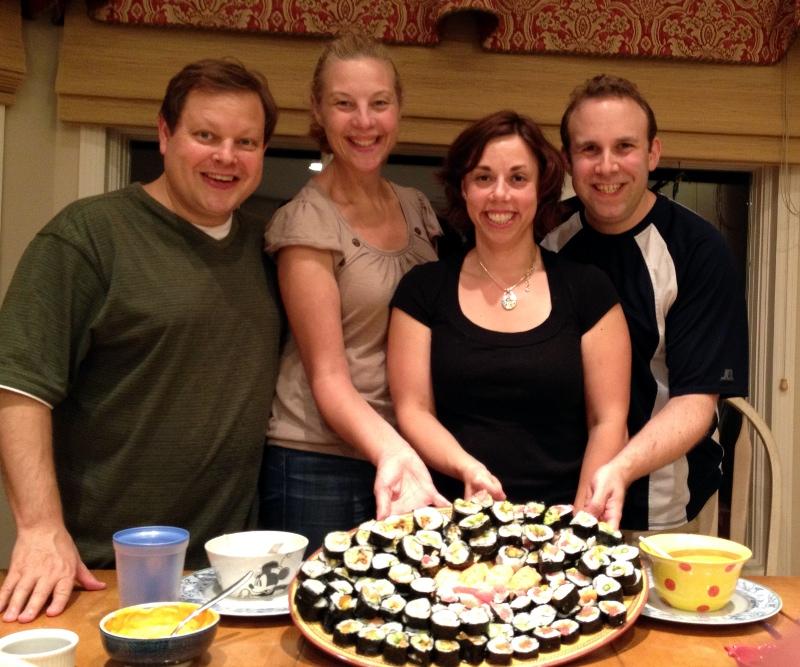 Have you ever made your own sushi?