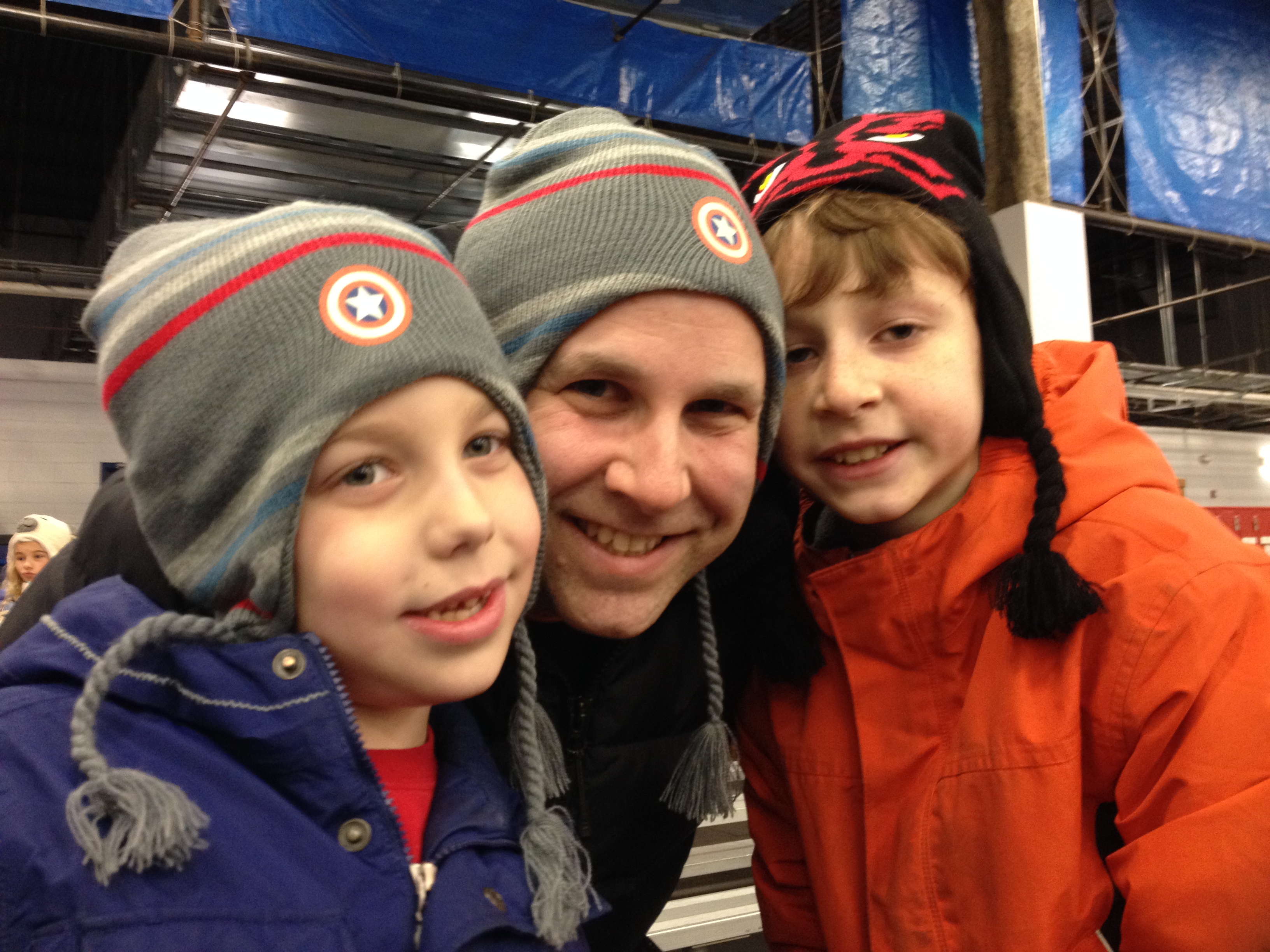 Last week when it was, what, like 40 degrees out, Ryan picked tennis as our family activity.  It’s tough to say no (even when it’s freezing out) if your kid asks you to do something that’s physically active.

So this week, it’s even colder. Closer to 30 degrees or so. And thankfully for this weekend’s family activity, we got to be indoors. Whew. But yeah, we ended up going ice skating!

There’s a nice ice rink on the fourth floor of our mall, so we headed over there this afternoon for some skating action. Jason’s gone a number of times before, and Ryan’s gone maybe once when he was younger. But he was super excited to go, talking about it all weekend long.

Both boys started off slow, hugging the wall for dear life. To be fair, so were about 75% of the other kids there, as well as a number of adults. I’ve gone a lot of times in my life and just love skating. I knew Jason would be okay on his own, so I let him slowly make his way around the rink, while Ryan and I inched our way around.

Jason did amazing, getting the hang of it after about one lap or so. He fell down a number of times but got right up no problem and kept on skating around, without touching the wall at all. Ryan, well, the first lap around seemed to take forever. He wouldn’t let go for awhile but eventually graduated to holding my hand and not the wall.

He fell a number of times too but got up (with some difficulty) and kept on going. For our final lap, he went maybe 1/8 around and then was too tired or scared and wanted to turn around and go back to Allie on the sidelines. I told him we can’t skate “against the current” so I grabbed his hand and we pushed off away from the wall, doing an entire shortened lap without holding on to anything but each other.

I was so proud of the little guy. He was all set to give up but he kept up with me, didn’t fall and ended up really loving it!

Jason had watched us make that final lap from the sidelines. He had fallen and hurt the back of his hand on his previous lap, so he was done, and just sat on a bench with Allie. I thought he’d call it a day and not want to go back out, but as we all were getting ready to go, I asked him if he wanted to go one last lap with his old man… and he said yes! So the two of us took off for a final lap around. I was super proud of him for that one!

After ice skating, we went to our favorite family sushi restaurant: East. It’s not the best quality food, though far from the worst. But the place is just a lot of fun, as they serve you sushi on a conveyor belt and you grab the dishes you want to eat. The kids LOVE ordering chicken katsu, as well as getting us our plates.

My favorite here is either the Shrimp Tempura roll or the American Dream roll (which has a bunch of vegetables and a piece of shrimp tempura in it). But sometimes, well, some rather… odd items make their way around. Okay, fine, some are just downright disgusting. 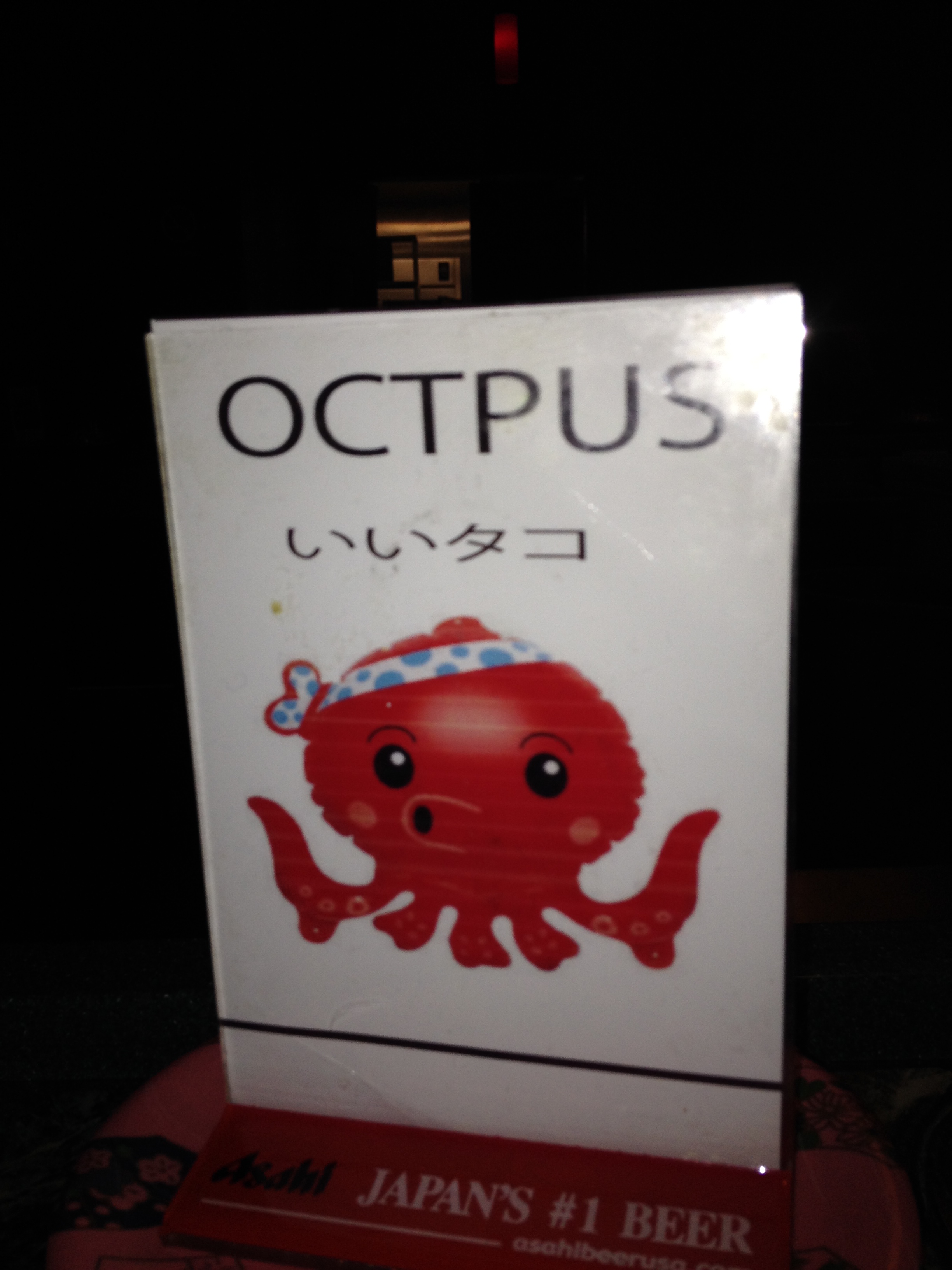 I mean, how adorable is this picture of an Octopus? Normally it says Baby Octopus and shows three small pics of cute little guys. So yeah, the sign is fine but… well, I’ll let you decide for yourself. Here’s a look at the Baby Octopus plate. 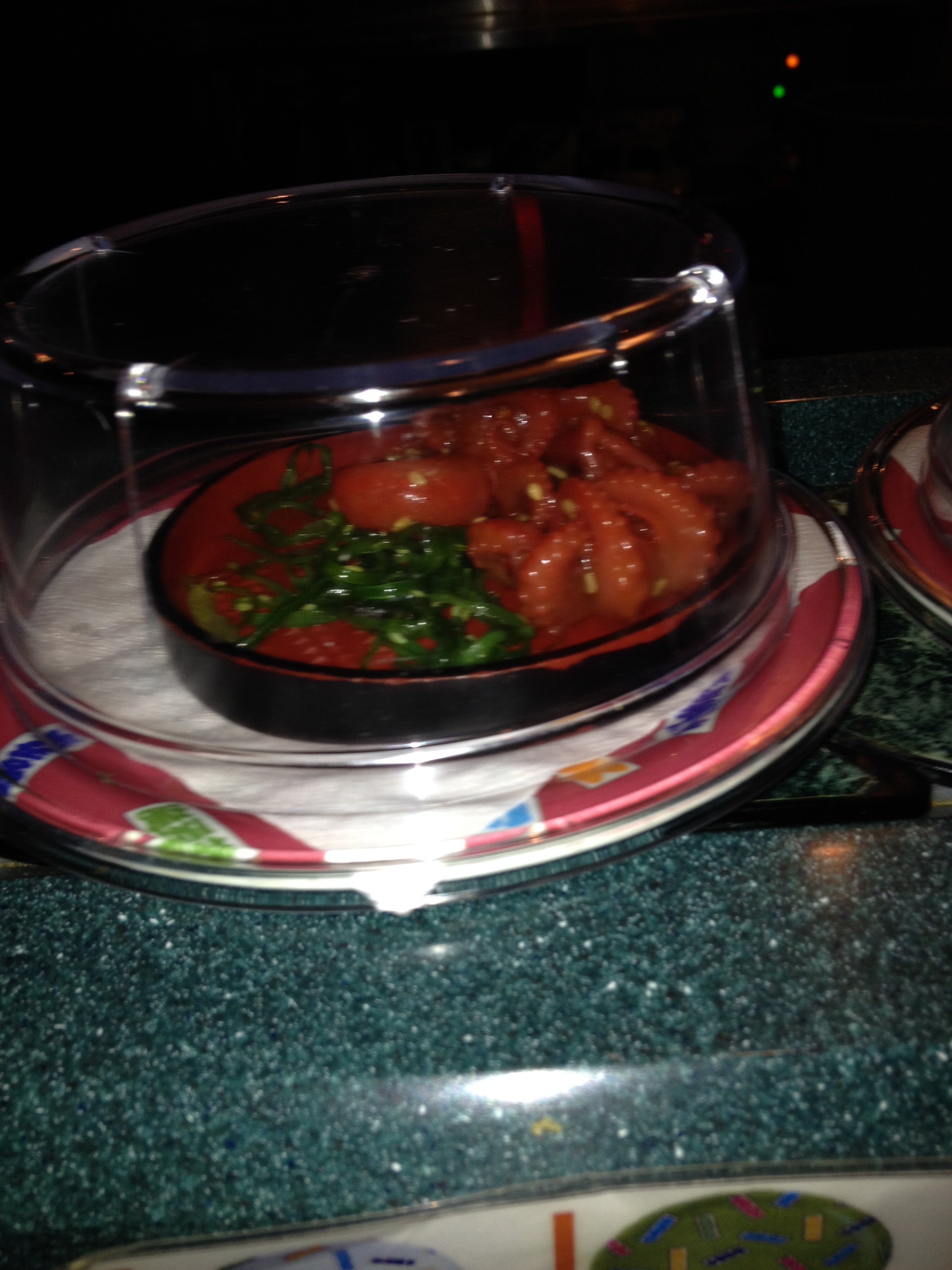 Yeah, sorry. I guess this post should’ve included a barf bag with it. Actually, you should be thanking me, normally you see the entire little baby octopus, head and all.

It was a great ending to a great weekend. And looks like it may just become a regular thing, since both boys really want to go ice skating again!

How was your weekend?