I can’t believe there’s an Ant-Man movie out.

I can’t believe there’s an Ant-Man movie out and it doesn’t stink.

I can’t believe there’s an Ant-Man movie out and it doesn’t stink; it rocks!

Yeah, I’ve been a life-long fan of the Avengers comics. Granted, I’m still a little hurt that Captain America didn’t become an official Avenger until Avengers #4, but still, I’ve always loved the team. And most of you may be surprised to know that Ant-Man was a founding member. Kind of.

See, in the comics (just like the movie), the original Ant-Man was Hank Pym. But unlike the movie, the comic book Hank Pym took on a number of different superhero roles starting with Giant Man. Over time, the crazy, genius scientist created Ant-Man and even Yellowjacket. Oh, he also was responsible for building the good-robot-turned-bad one called Ultron.

Yeah, I’ve always been a “giant” fan of Hank Pym. I’ve also loved Pym’s successor Scott Lang. The former criminal who wanted nothing more than to care for his daughter always pulled at my heartstrings.

Yes, Ant-Man’s a great character with a ton of history. Even if his super power is to just shrink down and talk to ants. 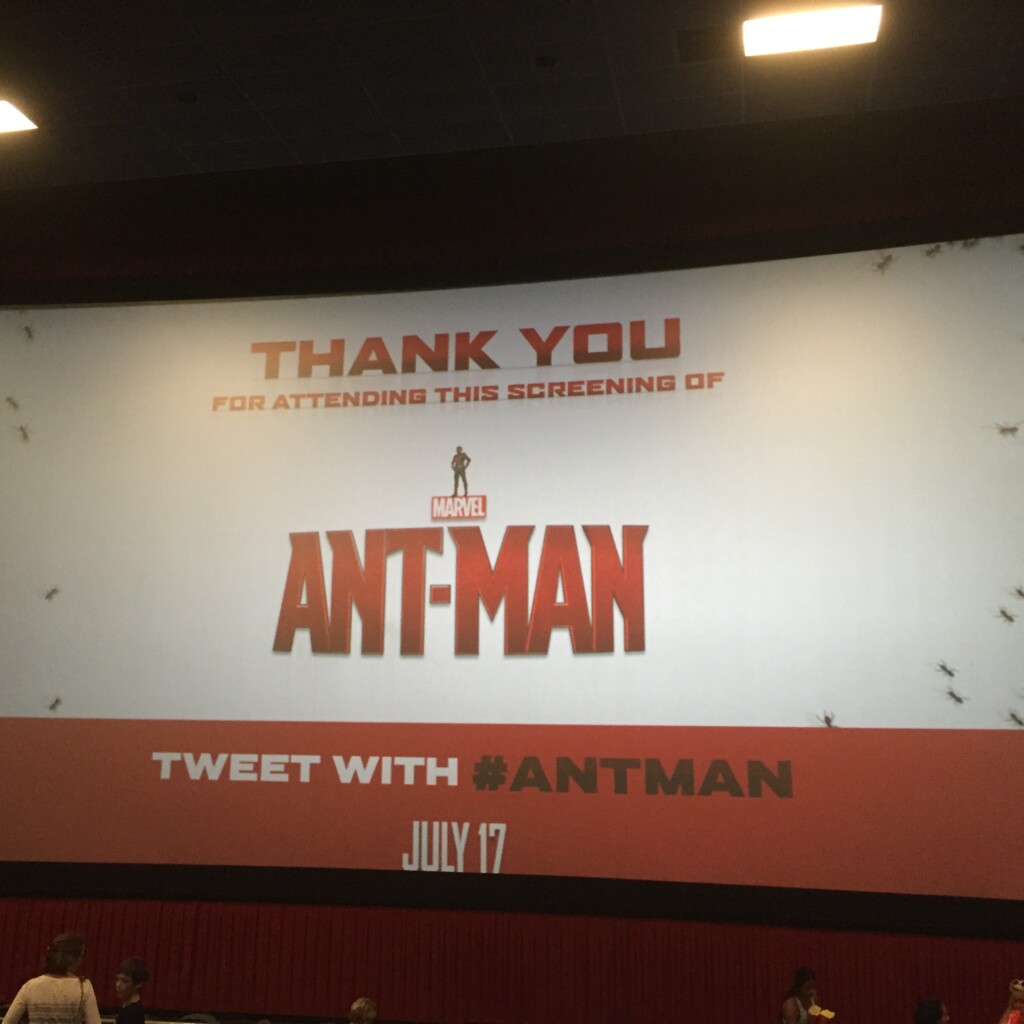 Last week, I was in NYC for a few blogging events (including Blogger Bash), and had the honor of attending a special screening at the Regal theater with a number of my fellow bloggers. What was so special? Well, besides seeing the movie before it was officially released, we got to meet Ant-Man himself, Paul Rudd! 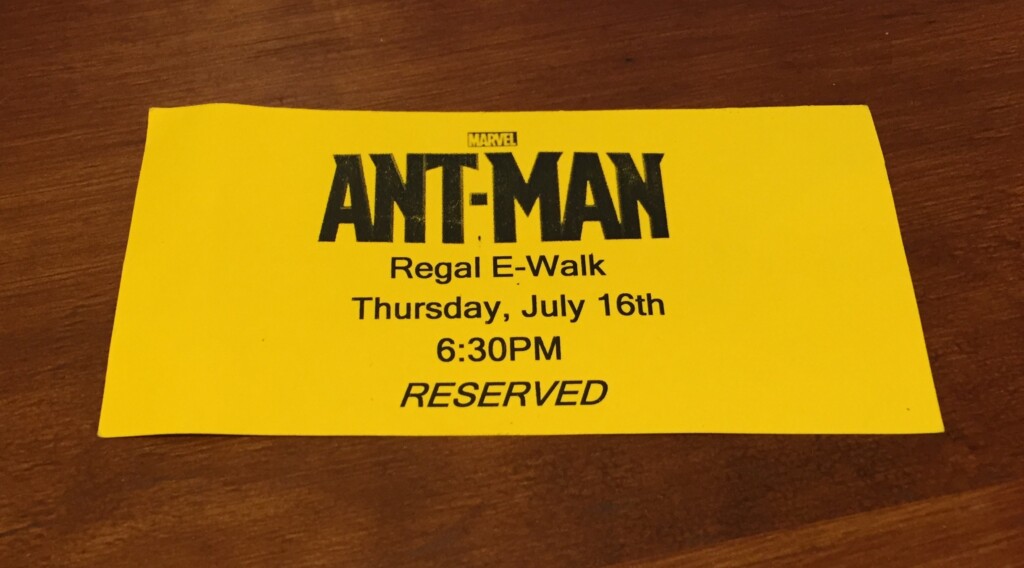 Yep, Paul came out before the film to chat with us for a few minutes about his role and the whole superhero universe he just stepped into. He was a riot and a ridiculously nice guy too. I even snagged some video of his talk to share.

I can’t wait to go see Ant-Man again this weekend with the family. Still not sure whether you should see it yourself? Well, keep reading then!

It’s funny!
I think Guardians of the Galaxy was a bit funnier, but Ant-Man is a genuinely funny film. From completely ludicrous situations to hilarious one-liners from Paul Rudd and his supporting cast, it’s a definite action comedy.

Evangeline Lilly!
Like most guys who were obsessed with ABC’s TV show Lost, I had a major crush on Evangeline Lilly and she does a fabulous job playing Hope Pym, the daughter of original Ant-Man Hank Pym.

Special Guest Stars Assemble!
I’m not gonna spoil anything, but Ant-Man most definitely fits in seamlessly with the rest of the Marvel Universe movies. You never know who may pop up next.

Cute Ants!
Okay, so you may reach for that can of RAID when you see ants crawling all over your kitchen, but in this movie, you’ll quickly fall in love with the little guys. They’re real smart and pretty incredible at helping our hero fight the good fight.

You Will Believe a Man Can Shrink!
The effects are so neat! Things you would never even think about, suddenly become life-threatening when you’re the size of an ant! Nothing looks fake or cheesy either, so strap in for a crazy fun adventure.

Easter Eggs Galore!
Like most Marvel movies, there’s a slew of fun Easter Eggs for die-hard comic fans. Ant-Man doesn’t let you down either! Be sure to keep an eye out for store names, and just a hint, but Ant-Man’s first appearance was in Tales to Astonish #27.

Rudd is the Man!
Paul Rudd plays, well, Paul Rudd. He’s the same funny, regular-guy actor you’ve grown to love, and he does a bang-up job taking on the mantle of a super-hero.

Pym vs. Stark
Love the fact that there’s definitely some history between the Pyms and the Starks! They’re both crazy, smart geniuses, but put them together and I’m pretty sure it’s like oil and water.

A Bad Guy With Purpose!
Every hero needs a villain, right? Well for Ant-Man, that’d be the nasty Yellowjacket. He’s no bank-robbing thief, though. This guy has gone bad for some very good reasons and you can totally see why he’s gone over to the Dark Side.

Give this Film Some Credit!
Again, no spoilers, but please do yourself a favor and stay through the credits. The whole credits. Nuff said. 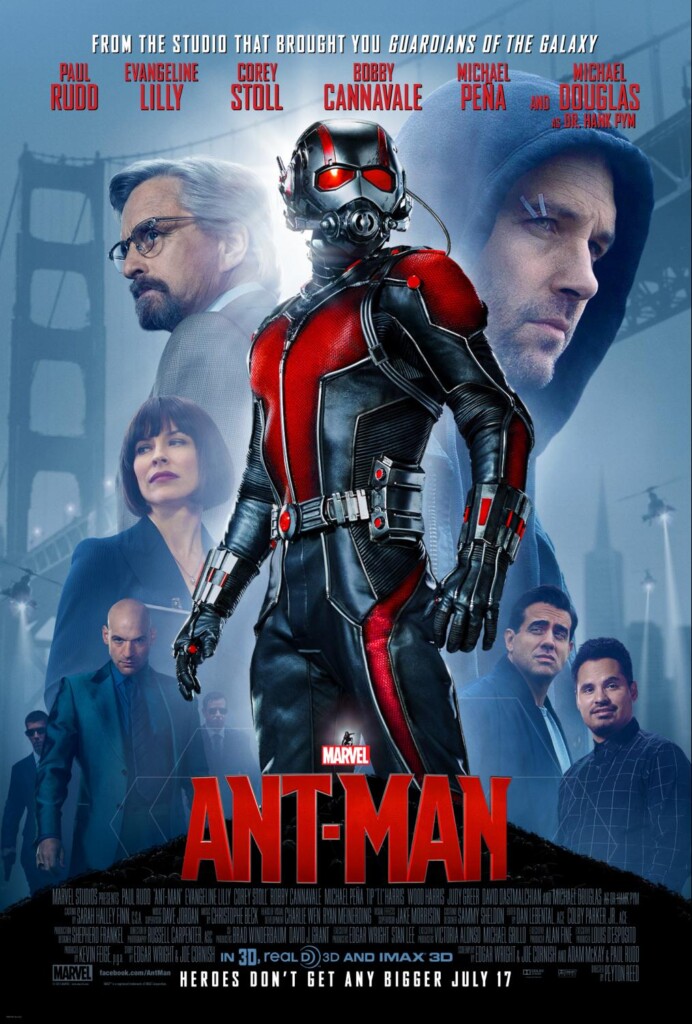