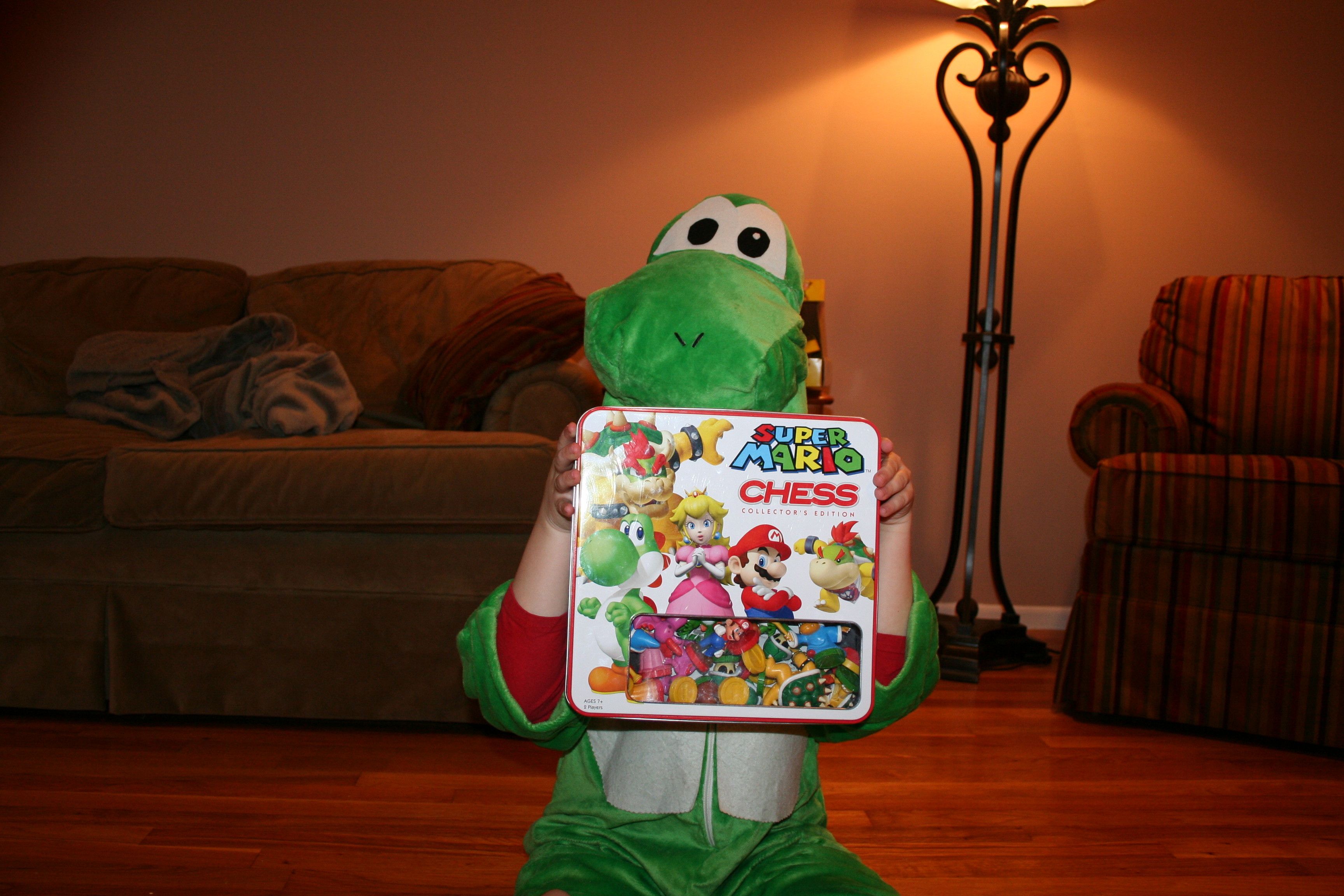 I’ve always loved playing chess. My dad taught me at a young age and I loved playing with him regularly using an old, beat-up plastic chess set. We even had a family friend Larry out in Long Island who’d play with me every time we visited. There’s just something about the game, you know? Maybe it’s the planning six moves ahead part that I really like.

I actually remember going with my dad to Manhattan when I was a kid. He took me to see his office and then a variety of other fun shops in the area, including a gaming store, a magic shop and yes, a chess shop! It was a real tiny store if I remember but filled wall to wall with custom chess sets. Any theme you could think of was represented, with some of the chess sets probably costing thousands of dollars based on the materials they were made from.

I’m happy to see both my boys have followed the family tradition. Yes, they both were even members of their school chess club for a few years. (Oddly enough, in elementary school, chess club is considered cool.) Any chance to buy our kids something that doesn’t need batteries and encourages thinking is a plus in our books. So Allie and I bought Jason a Super Mario Chess set a few years ago. To say he loved it would be an understated understatement.

Put out by the fine folks over at USAopoly (who have a great board game giveaway going on right now), it’s your standard chess set made up of “good” and “bad” Mario characters. Here’s how the two sides break down:

The figures themselves are actually really well made. They’re a heavy plastic and finely detailed. Seriously, they’re loads better than most of the regular old Mario figures you can buy at the local toy store! They also have the chess piece’s name printed on the bottom of the figure so you don’t have to worry about forgetting that Yoshi’s one of the knights.

I had Jason and Ryan test the game out so I can show all of you guys what the set really looks like.

Ryan still wants to know why Luigi is the “Queen” on Mario’s team. 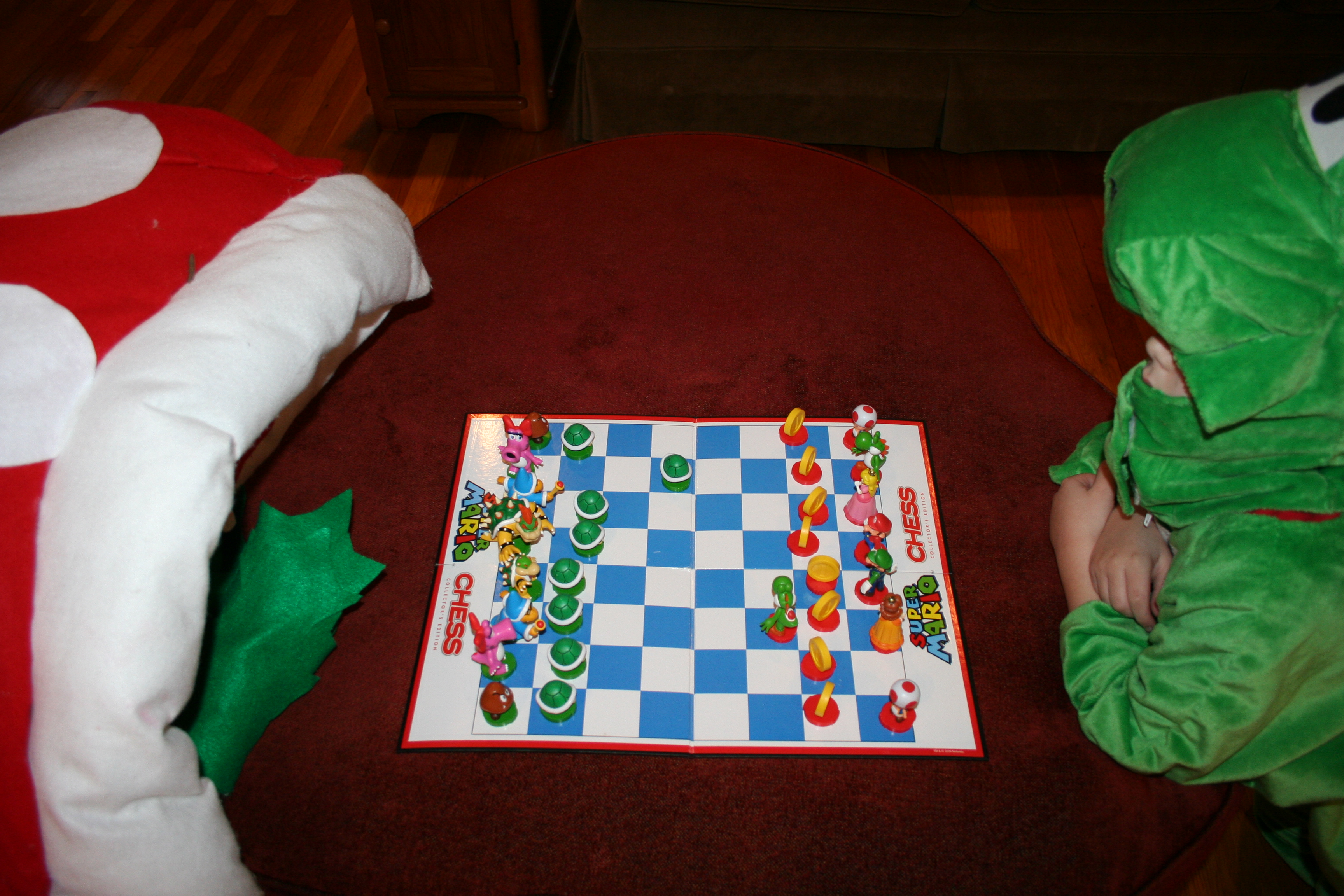 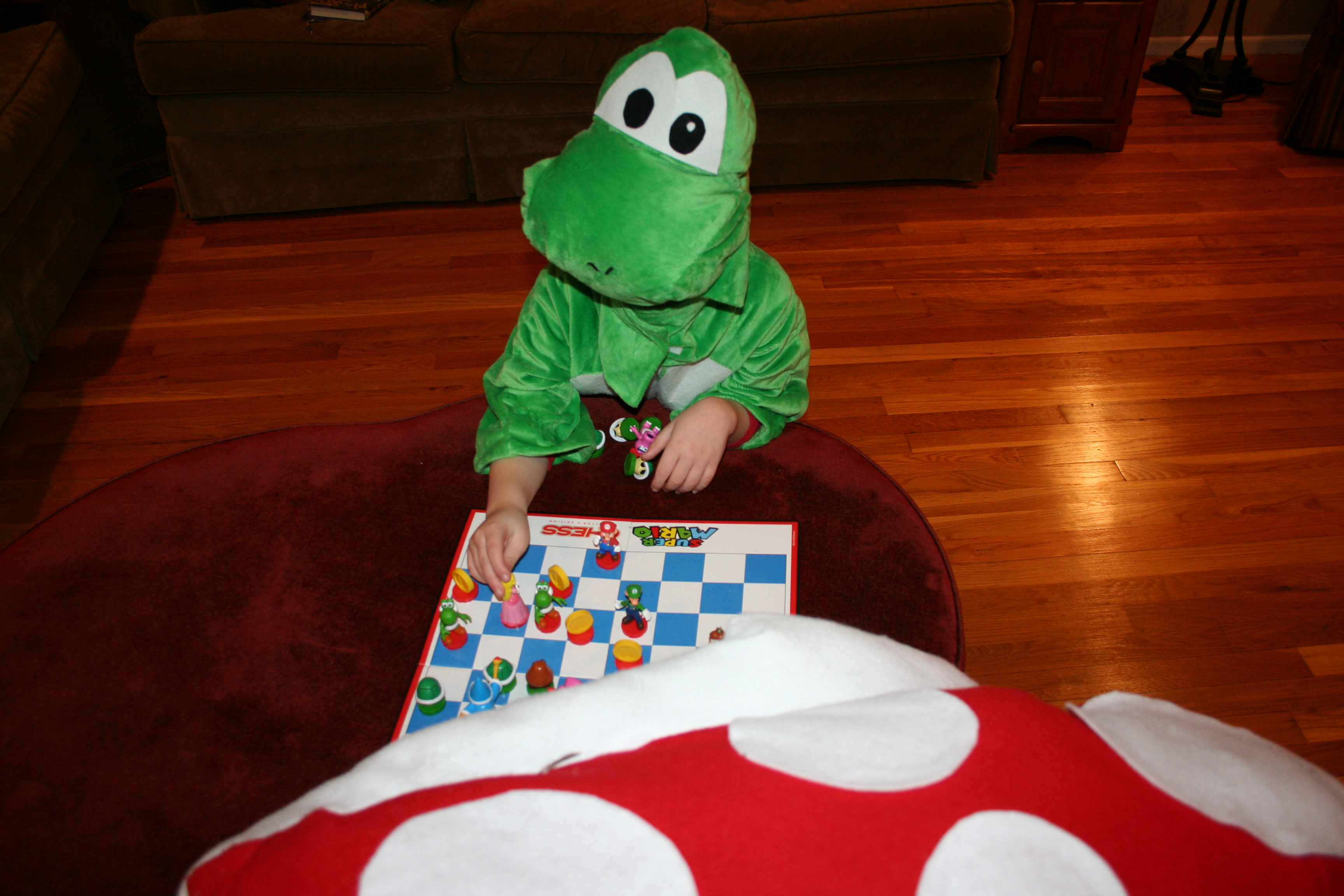 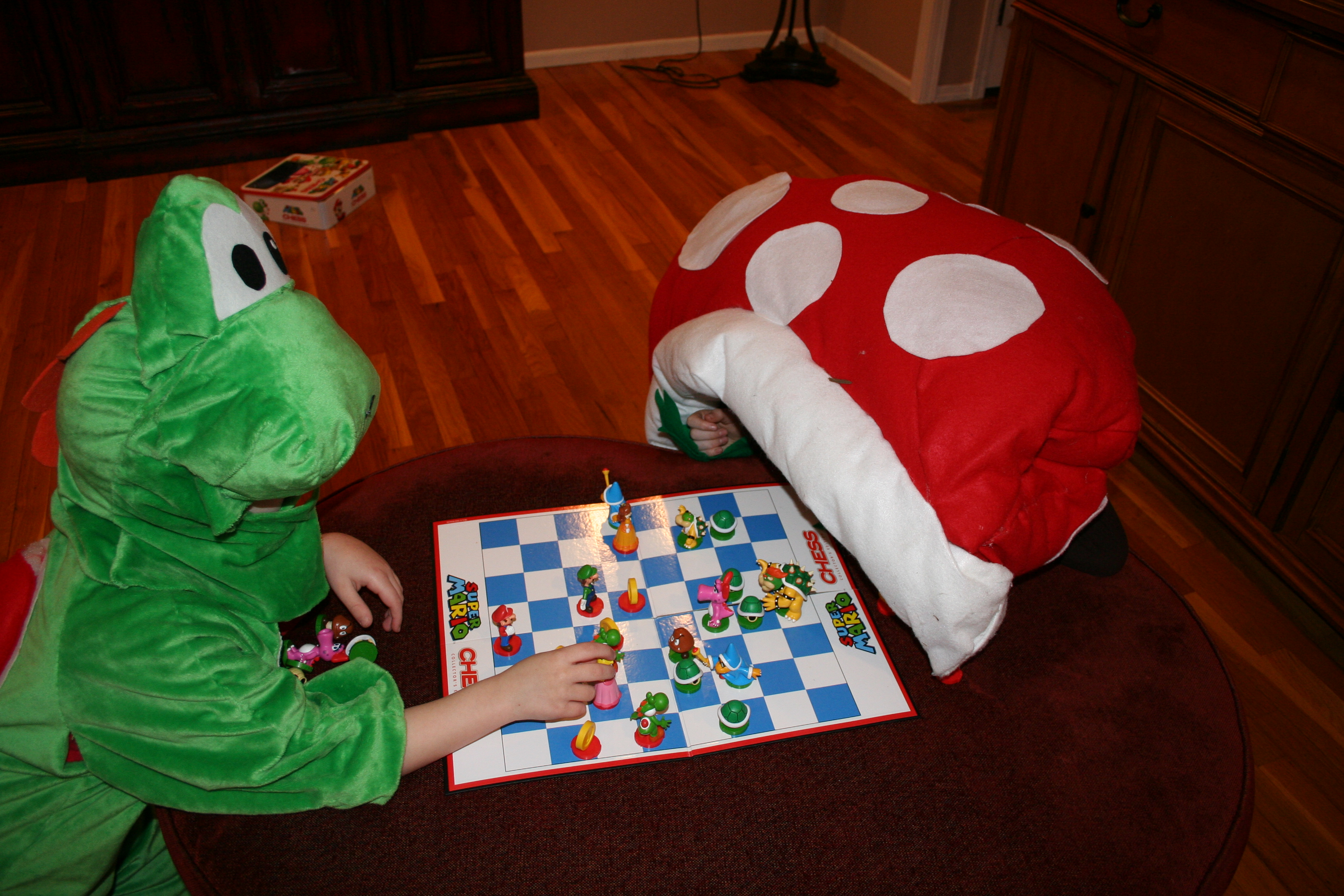 Of course, if you’re game is over, the fun doesn’t have to end. In fact, with my kids, that’s when the fun really begins as they play all sorts of “games” with the figures. Today it was apparently the 75th Million Annual Hunger Games, starring Mario and Bowser. 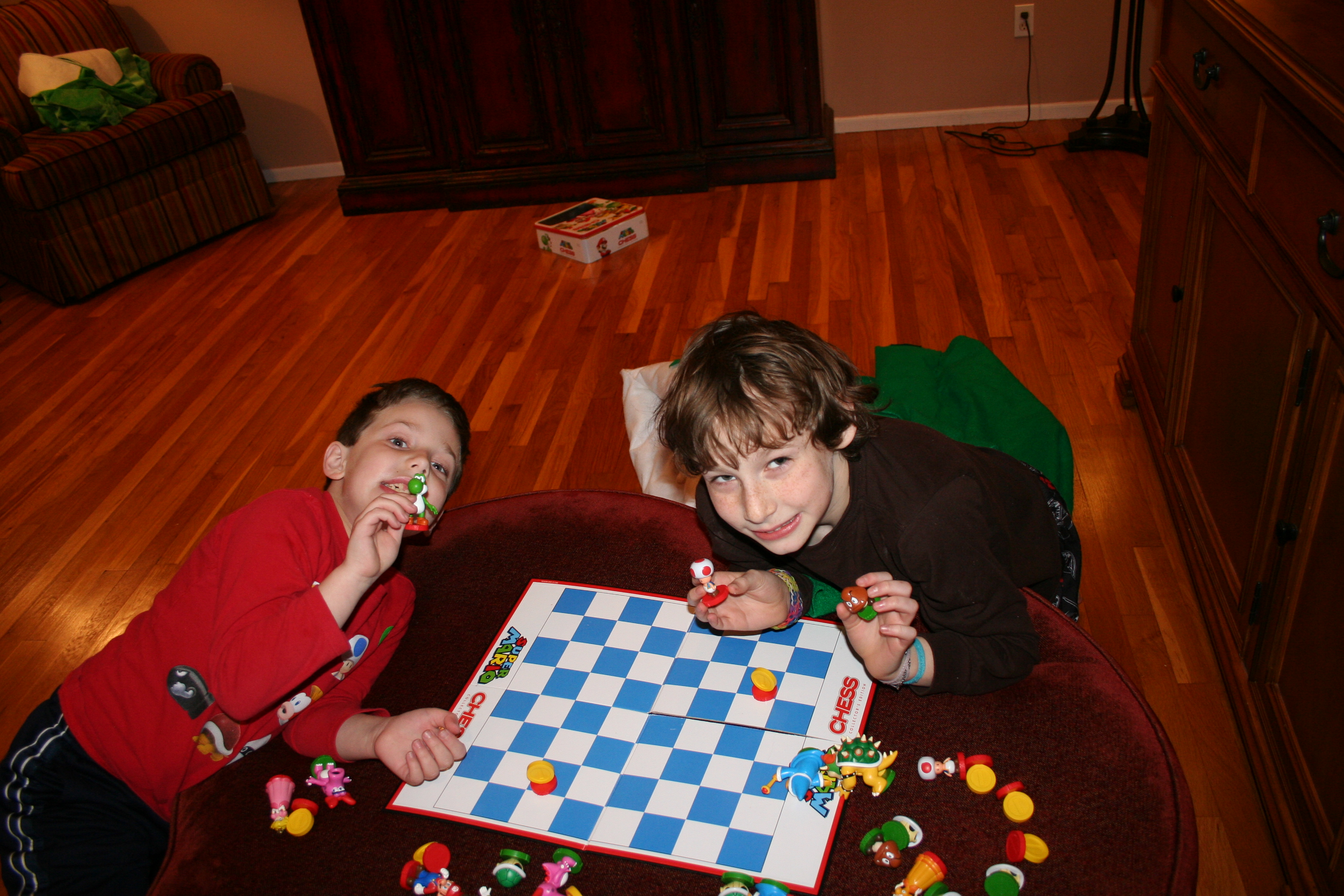 It’s really a fantastic chess set and if you’ve got a chess fan in the family, this would make the perfect Christmas gift.

Thanks to my new friends over at USAopoly (these guys are buddies with zombies, so you definitely want to play nice!), Mommy’s Busy, Go Ask Daddy is giving away a Super Mario Chess set to one of my lucky readers! 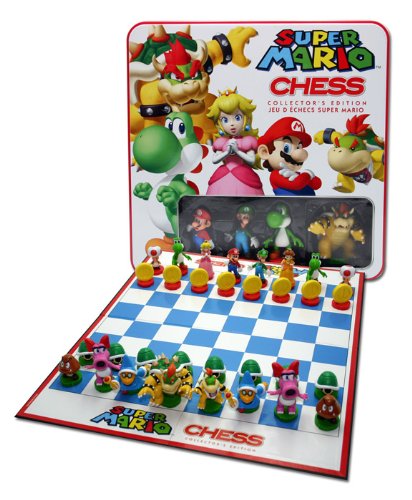 Giveaway ends on December 30, 2013 at 11:59 p.m. The 1 winner will be chosen at random and announced on this site. Giveaway is open only to legal residents of the fifty (50) United States (including District of Columbia), who are at least eighteen (18) years old at the time of entry. The 1 Winner will be notified by email and has 48 hours to respond or a new winner will be chosen.