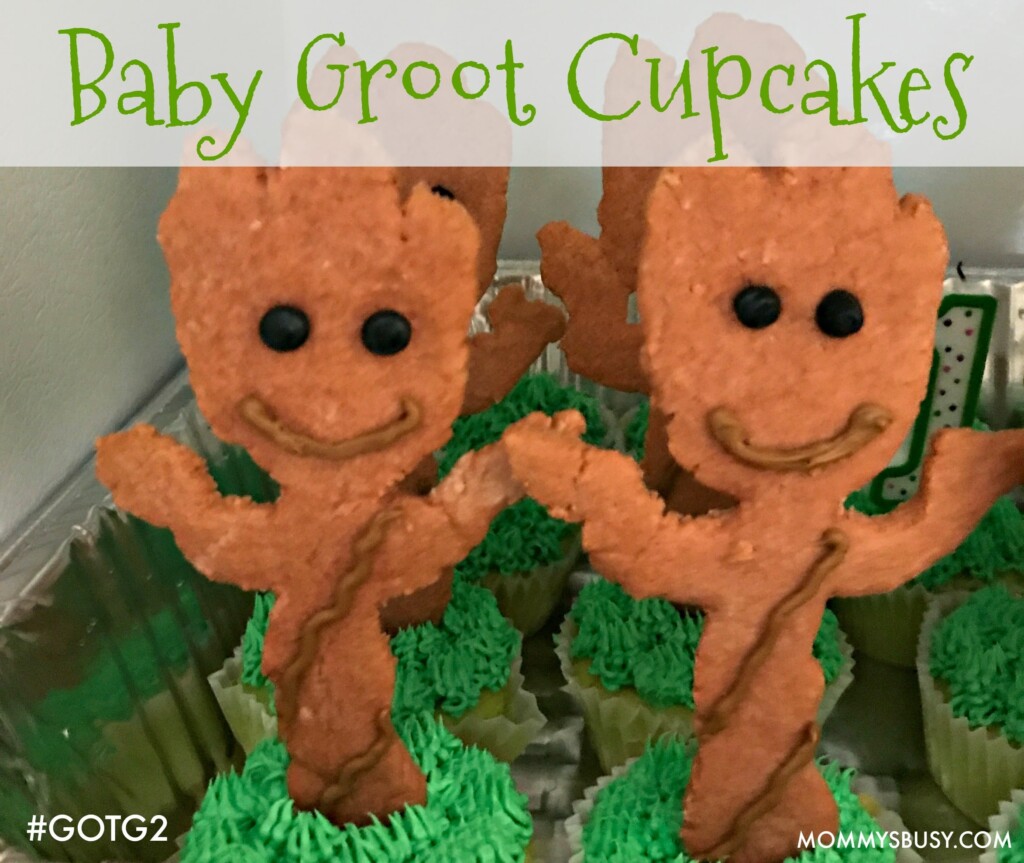 Marvel Studios can say so very much with so few words. Why, just three little words in fact can move even the stiffest of hearts. No, I’m not talking about, “I love you.” I’m referring to the tree-like alien Groot, who’s famous for his extremely limited vocabulary that consists almost entirely of, “I am Groot.”

We just saw Guardians of the Galaxy 2 this weekend to celebrate my son’s 14th birthday and the movie was unbelievably amazing. I think I may’ve liked it even better than the first, and I really loved the first! But that’s not what this post is about. It’s about being hooked on a feeling. And that feeling is the sweet sugary rush of a birthday cake. Or in this case, a birthday cupcake. More specifically, a Baby Groot cupcake!

Y’see my wife Allison makes the most amazing birthday cakes for all of us. We’ve had everything from Disney’s Goofy to Beaker from The Muppets! She took a few pastry classes at a local Michael’s store years ago, and hasn’t let up since. Not only has her speed increased with piping frosting onto a cake, but her creativity and skill has vastly improved!

For Jason’s birthday, since we were taking him and his friends to see Guardians of the Galaxy 2 in theaters, we thought a Groot cake would be perfect this year! After doing some research, Allie stumbled upon the most amazing and adorable Groot cupcakes courtesy of JK Denim from Koalapops. There’s even a nice step-by-step video to walk you through it and a downloadable stencil!

It couldn’t be easier, right? Right!

Allie dove right in and followed the directions to create an army of Baby Groot Cupcakes! Follow along and I’ll show you how the magic unfolded in our very own kitchen: 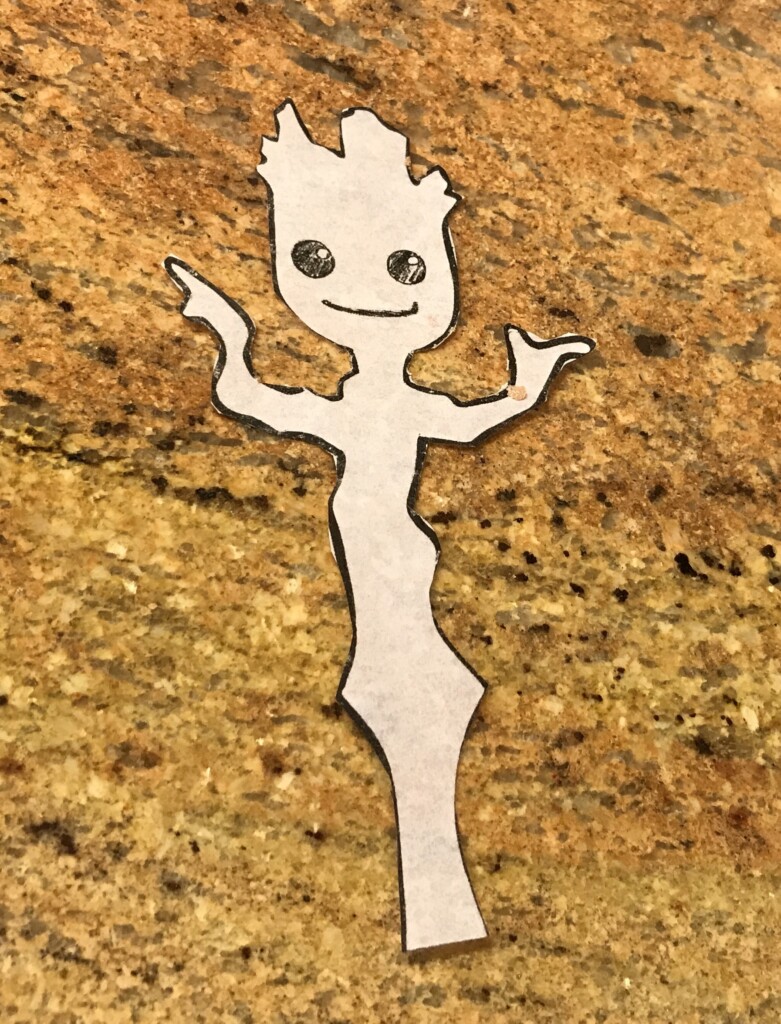 The first thing she did was print out and cut the Baby Groot stencil onto wax paper. This would be basis of all Groots to follow. The original seedling, if you will. 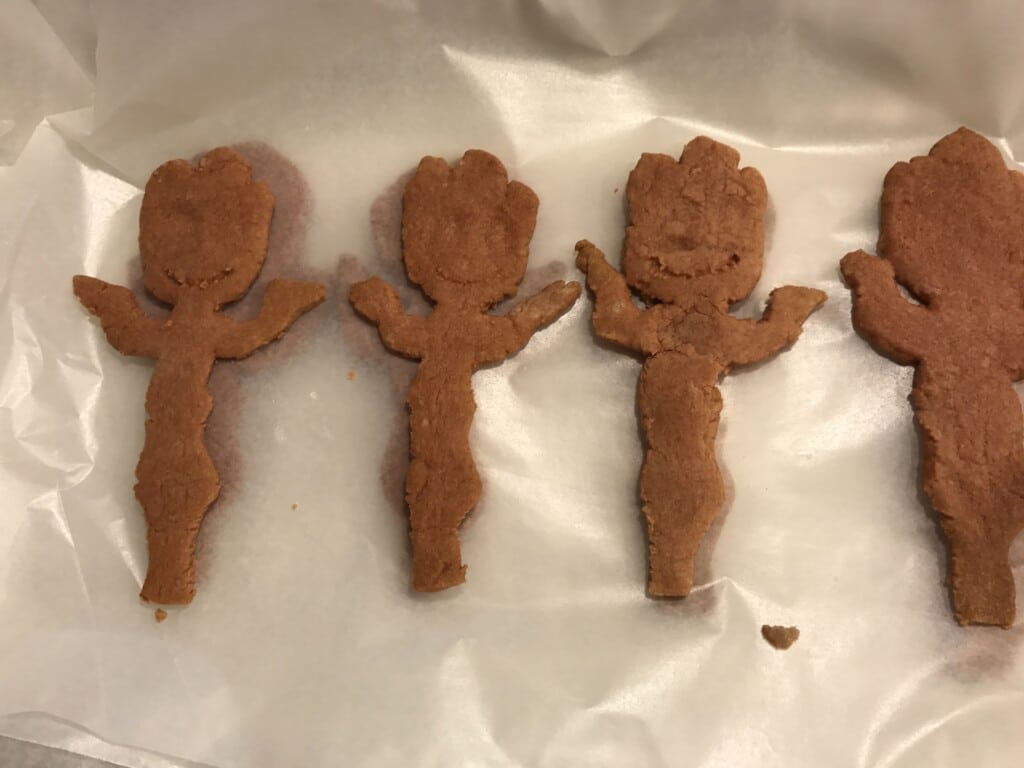 Next, we took those big ol’ tubes of Pillsbury sugar cookies (though, obviously you can use your mom’s favorite sugar cookie recipe if you like) and added enough food coloring to it to turn the dough brown. This is about the only place (other than eating!) that I helped out. Kneading the dough with a few drops of food coloring was a really neat process. It didn’t take long before the dough took on a familiar brownish hue.

Next, we rolled the dough out and with the help of the stencil (and a sharp knife), she cut out the shapes of Baby Groot, placing each one on a greased cookie sheet. 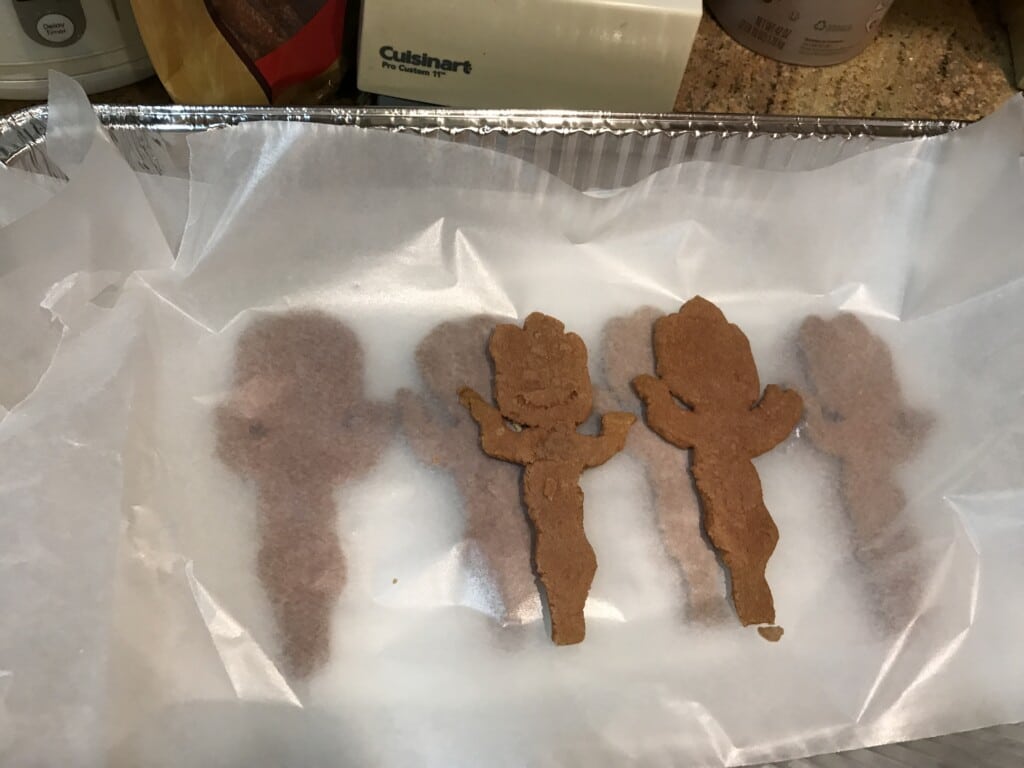 After cooking a few trays full of Baby Groot Sugar Cookies, she let them cool and very carefully placed them on wax paper, layering a set of four per row. Then it was off to the freezer to chill. 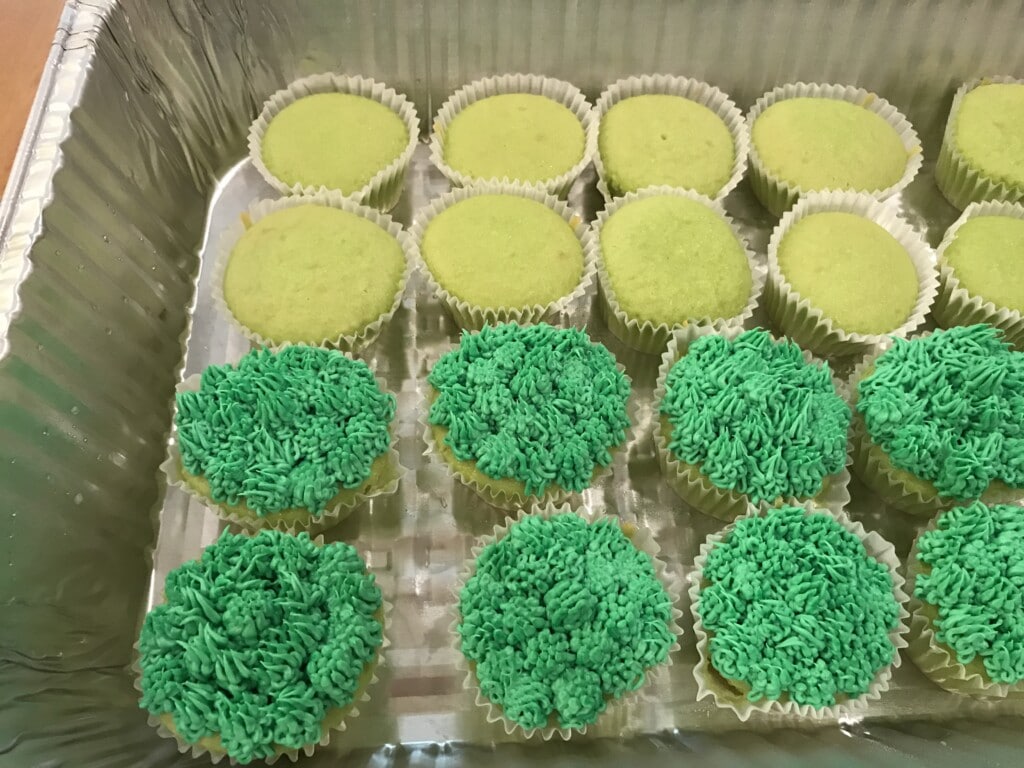 Meanwhile, it was time for the cupcakes! Again, feel free to use your favorite cupcake recipe, but Allie went with Jason’s favorite Pillsbury Yellow Cake, and added green food coloring to give it a lime green look for the cupcakes themselves. After baking them, she let them cool and froze them as well. It’s always easier to apply frosting to frozen cakes, which is why she does it that way.

Next up is the frosting, Allie’s speciality! She’s truly a purist when it comes to frosting. No easy-to-mold fondant. No already-colored frosting. (They often have a funny taste.) Nope, if you know my wife, you know there is one, and only one type of frosting that is allowed in this house: Pillsbury Vanilla Frosting!

She added the perfect amount of green food coloring to get the right color of grass and then used a Wilton Tip #233 to pipe out the cutest little grass-covered cupcakes I’ve ever seen.

Again, when finished, these bad boys were sent to chill in the freezer! 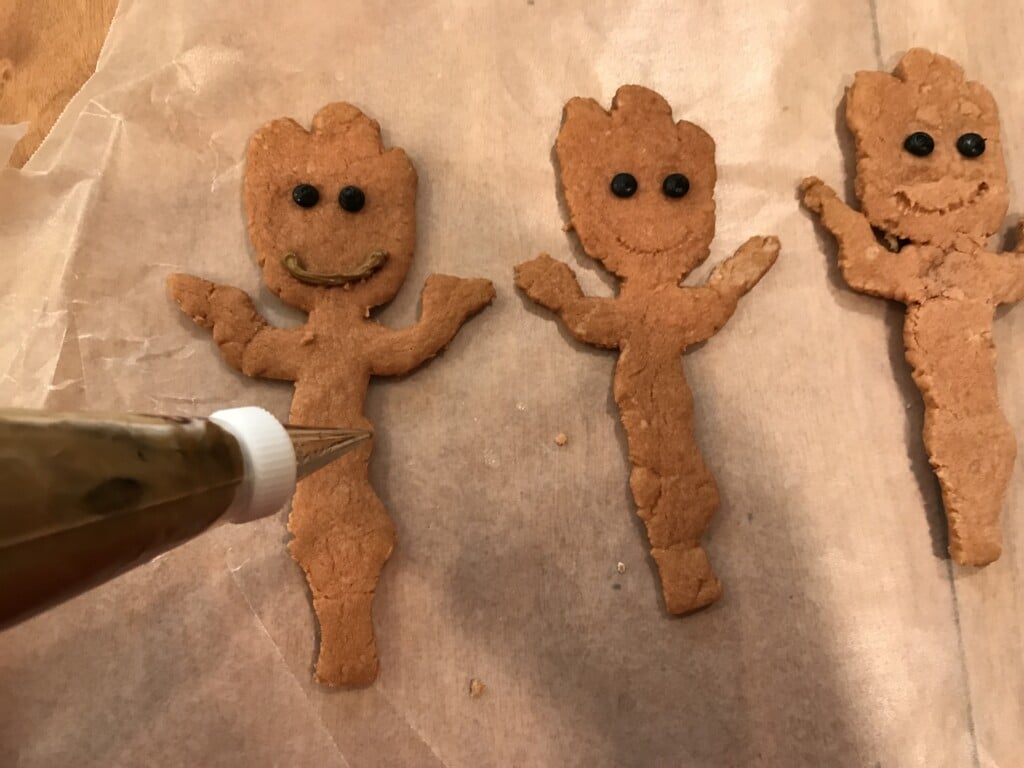 Next up, are the Baby Groot Sugar Cookies! Totally chill at this point, she took them out and very carefully piped in black dots for the eyes, a brown half circle for a smiling mouth, and then streams of brown up and down the body to simulate Groot’s bark. 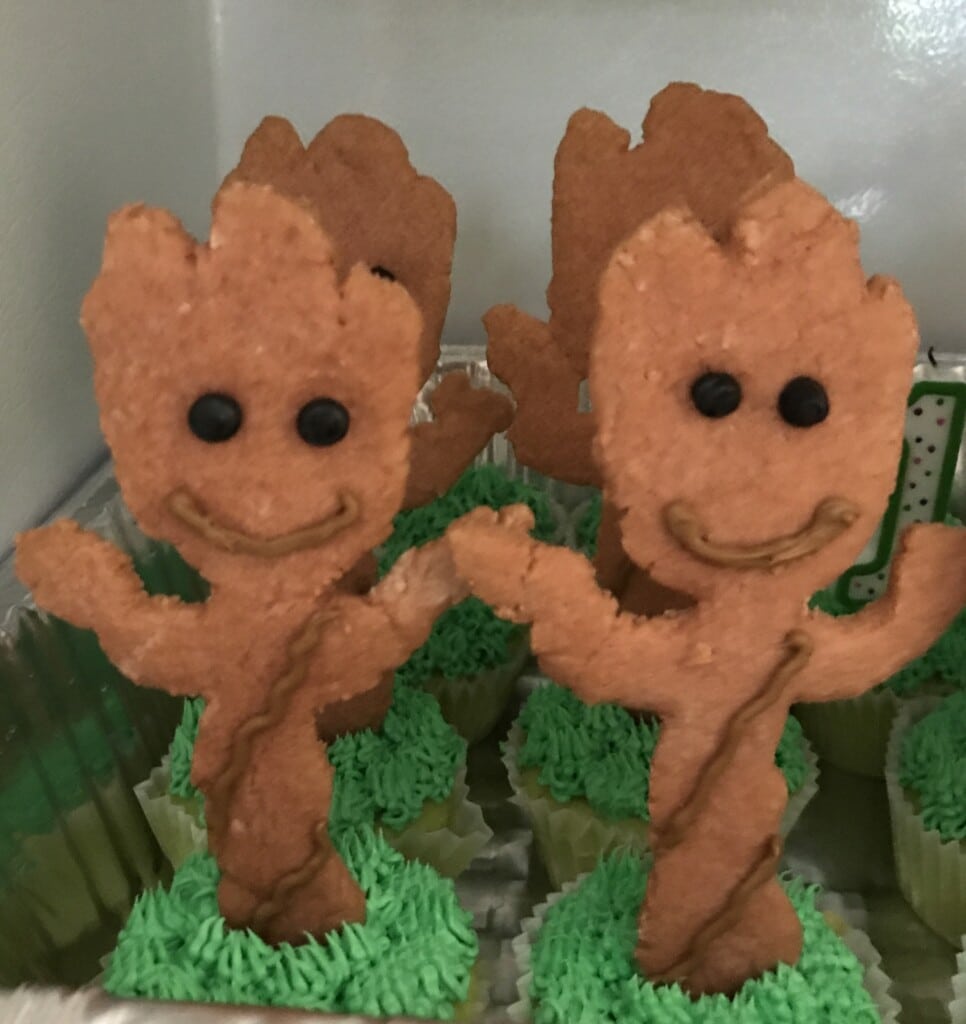 Only one step remained: The assembly! After taking the frozen cupcakes out, she let them thaw a bit and then gently pushed the frozen cookies into each cupcake, being sure to tuck li’l Baby Groot in to his grassy bed. 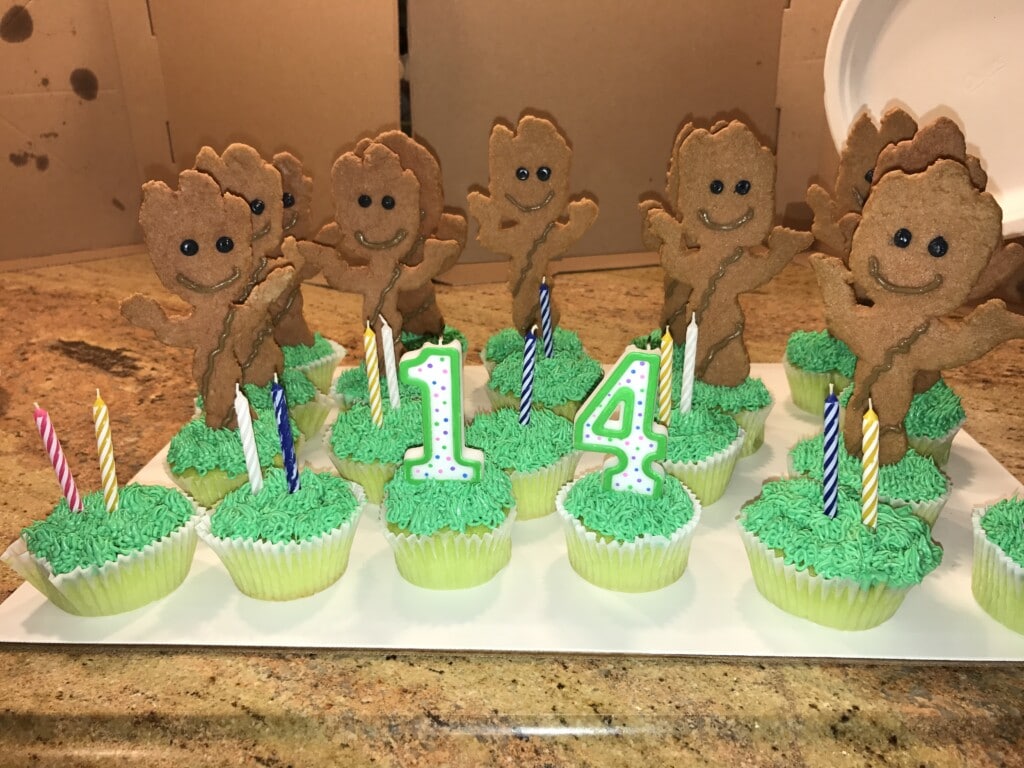 For the birthday boy, we arranged the cupcakes and added a bunch o’ candles for grand presentation. 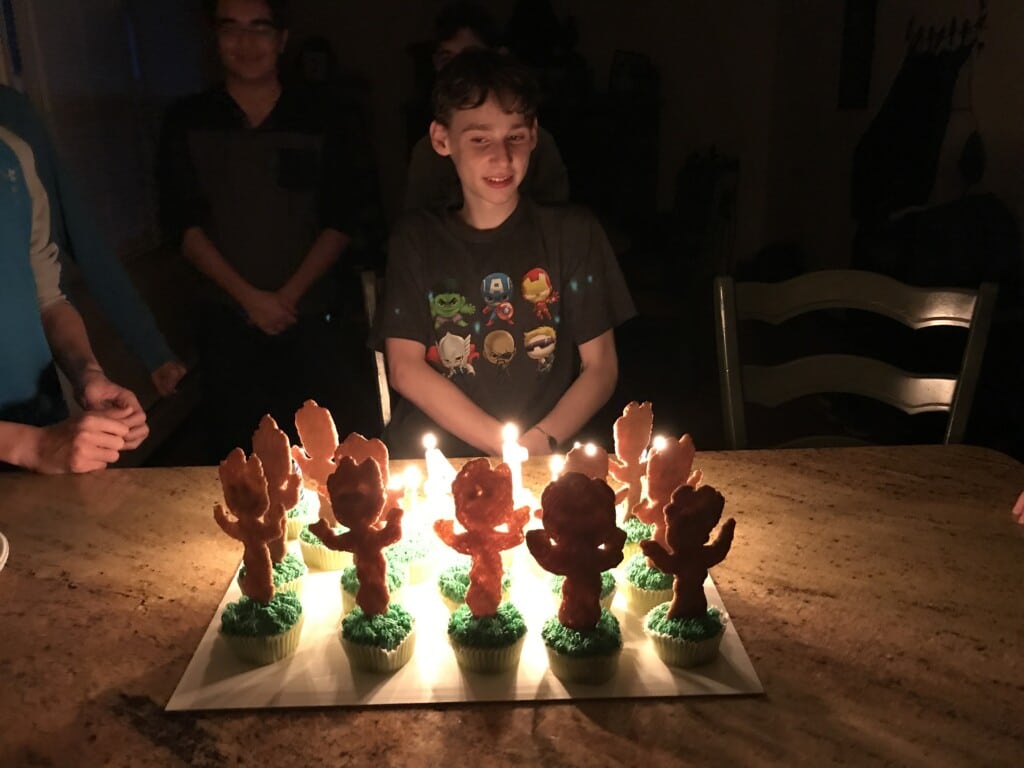 Jason was shocked, impressed and floored by his little army of Baby Groot Cupcakes! I just love this pic of them basking in the glow of the candlelight. 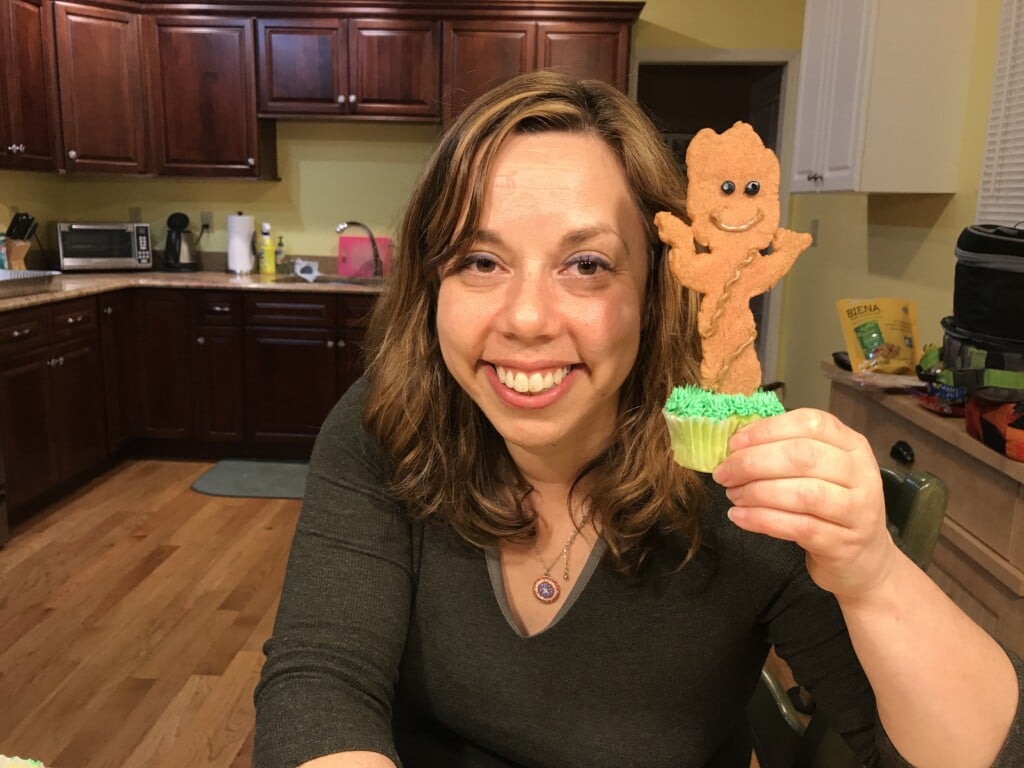 Here’s my beautiful wife showing off her masterpiece! Also notice the super-cool necklace she’s wearing in honor of the Marvel-ous movie we saw! 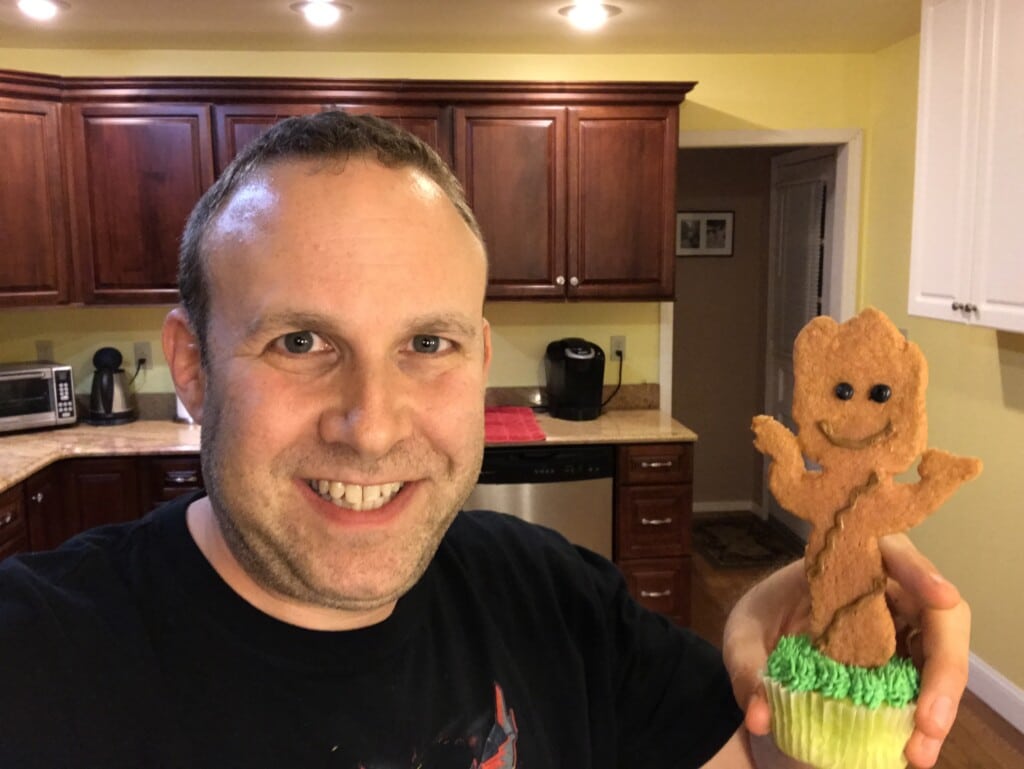 My li’l buddy Groot was almost too darn adorable to eat! Almost. 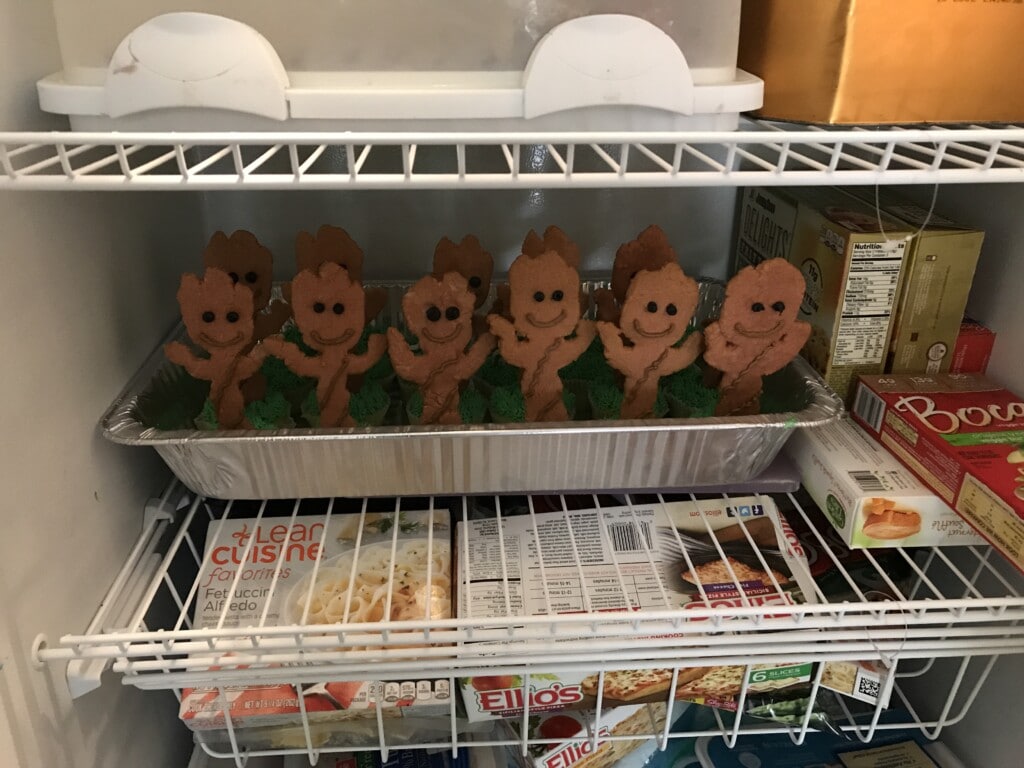 And there you have it! A pretty easy way to fill your freezer with an army of Baby Groot Cupcakes! They were as delicious as they were adorable!

Now be sure to go see Guardians of the Galaxy 2 in theaters now! And if you’re really sneaky, you can slip a few of these in your pockets to enjoy during the movie!

What do you think of our Baby Groot Cupcakes?
#GOTG2