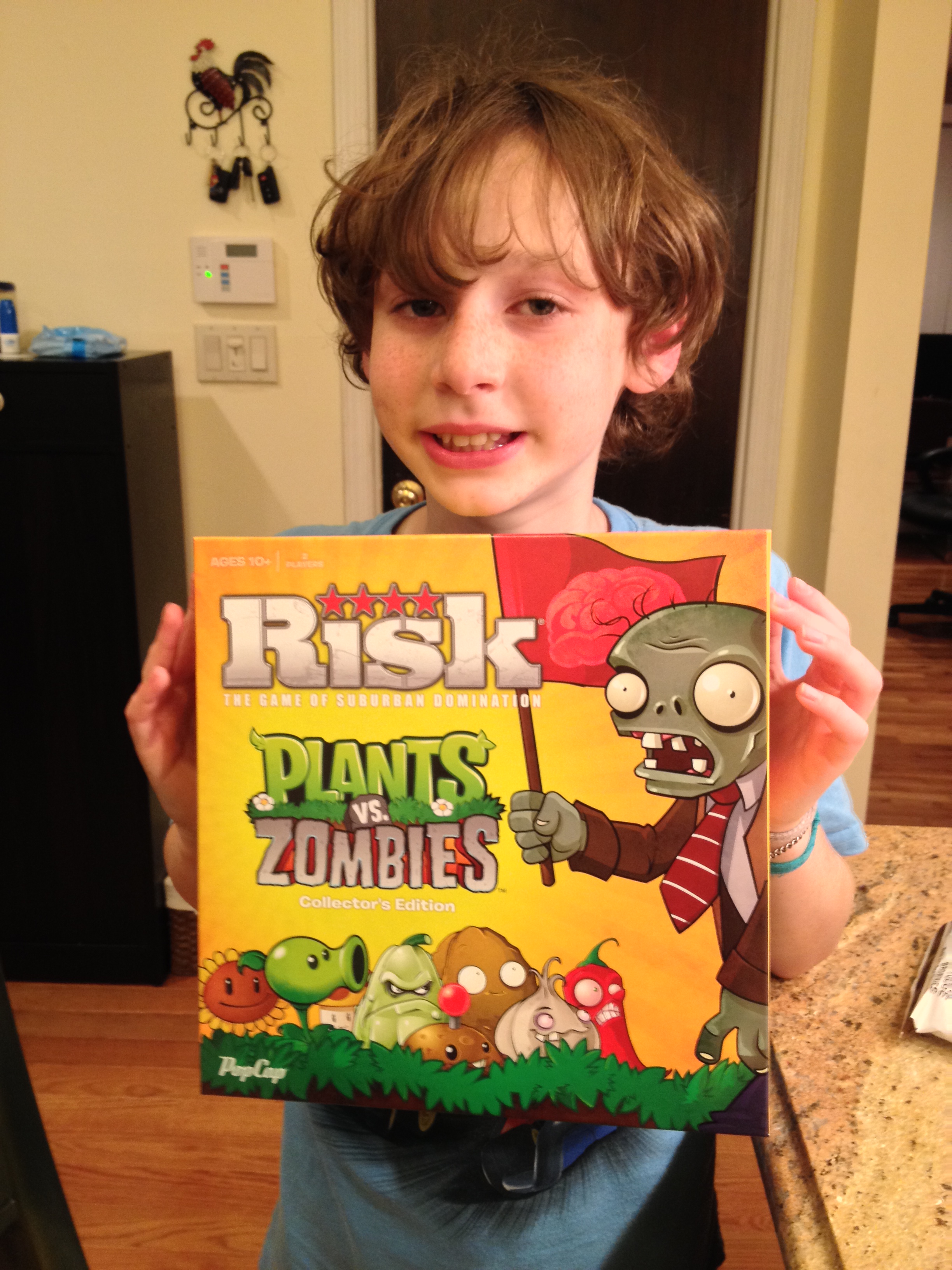 One of my favorite games as a kid was RISK. It’s a classic board game that beautifully mixes skill and luck with one goal in mind: World Domination!

I played it a ton when I was younger, usually with my buddy Gary. He had two older brothers and a basement full (we’re talking floor to ceiling!) with board games. So he even had one of the original versions with wooden pieces!

Allie and I recently bought RISK for Jason and while we haven’t had time to play it too often, he definitely likes it. Recently, however, I was contacted by one of the coolest video game companies in the world: PopCap. The makers of the hilariously awesome Plants vs. Zombies game have come up with a spinoff to beat (or is that “eat”?) all spinoffs.

Yep, it’s RISK: Plants vs. Zombies Collector’s Edition. And as the box claims, it’s “The Game of Suburban Domination.”

I told Jason about it this new mashup of two of his favorite games and I honestly don’t remember him squealing with so much delight! So when it arrived the other day in the mail, it was tough to hold both of us back!

I put my cans of Sprite Zero aside and ripped open the box! We couldn’t wait to pop out the pieces and see what was included!

How cute are these playing pieces?!? Each side has a 1 and a 3-unit piece. Personally, I think the bucket-headed zombie steals the show.

There’s all sorts of cards and tokens to use in the game too. My favorite are these little ReMINDer tokens, so you can remember which plant or zombie just attacked. It took me a minute to get it, but come on, that’s pretty darn clever! 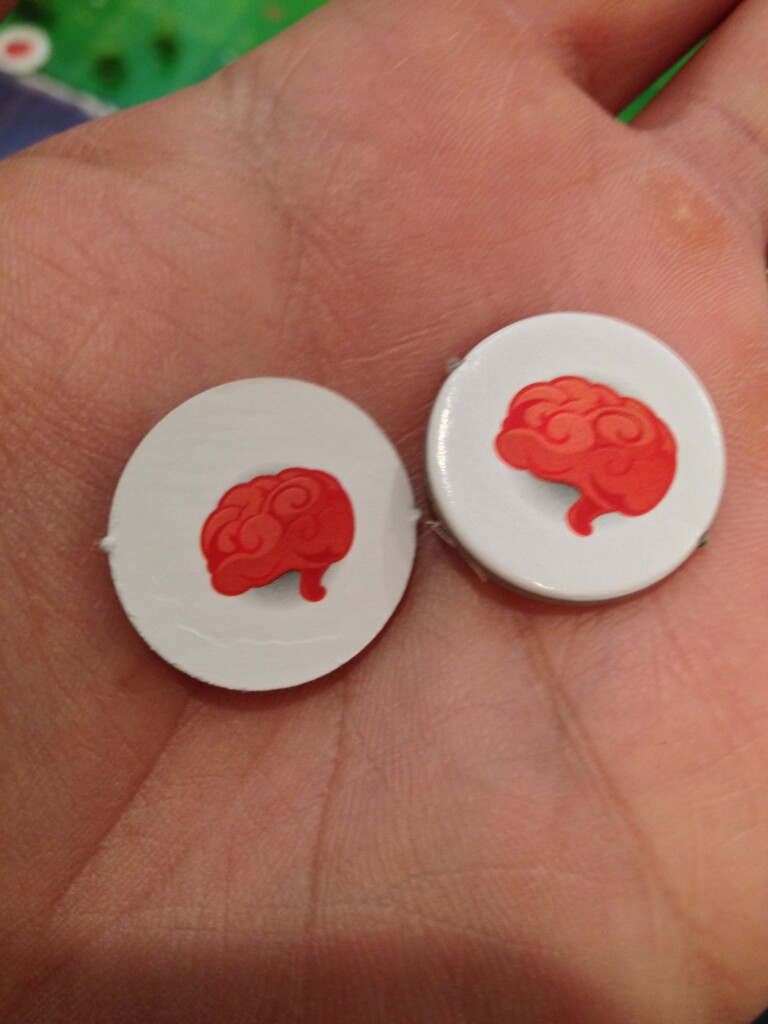 The instructions are fairly detailed and explain the three styles of play nicely. There’s also loads of cartoony artwork and jokes that continually crack me up, like the suggestion of a pancake-making car! 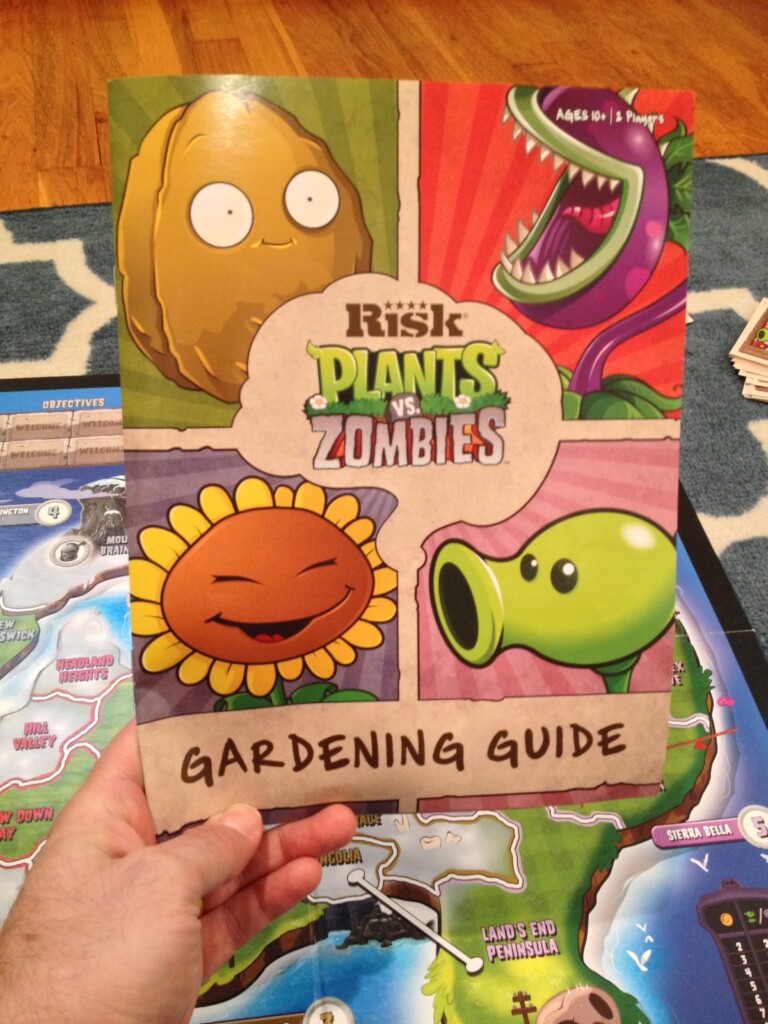 If this game was just RISK with Plants and Zombies it’d be cool. But it’s actually so much more than that! There’s three different ways to play: Mission Objectives, Total Domination, and Tower Defense.

What makes this extra cool is that the board is double sided! One side is a huge brain-shaped map of Brainsborough. This plays just like regular Risk, where you need to take over territories as you kill off your opponents troops. There’s bonuses for how many territories you own, what you’ve taken over this turn, how many units you have, etc. There’s also cards that offer special abilities, or that can be used to “purchase” powerful Upgrade Cards. 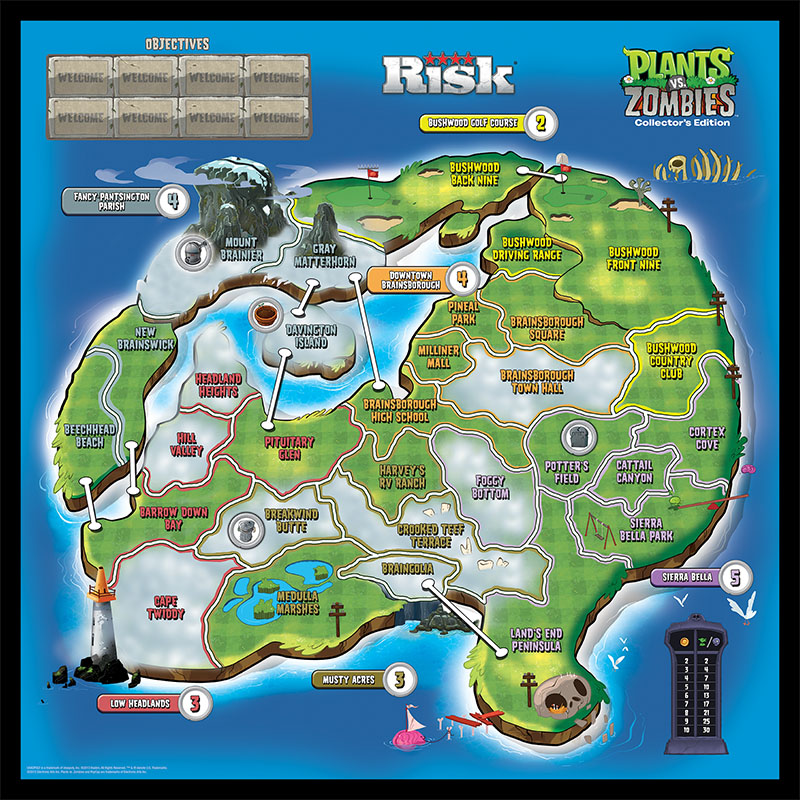 The flip-side of the board is seriously a brilliant move. You can play “Front Yard Skirmish Mode” (the Tower Defense style of play), which lets you use RISK-like rules to bring the video game itself to life!

Obviously this is the style Jason wanted to play first, so we did. He grabbed the planets while I led the army of the undead zombies! 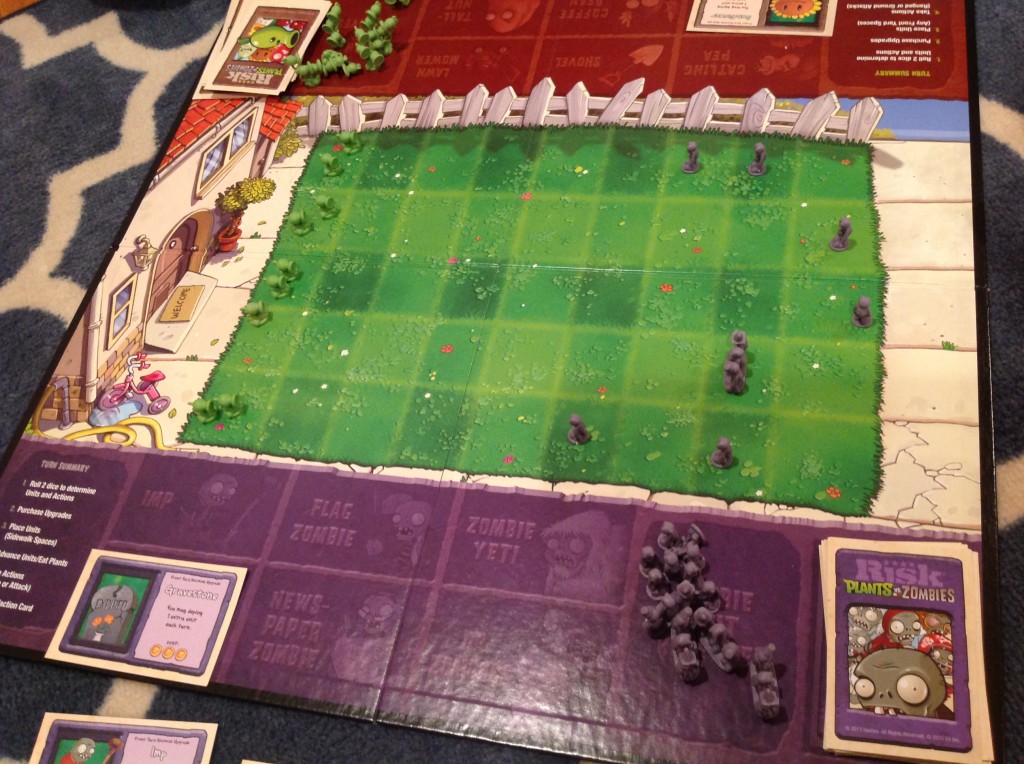 Just like the video game, the Zombie objective is to make it to the front porch. The plants need to stop them. If one zombie makes it over, it’s game over! If the plants destroy every one of your zombies, it’s a victory for the green. In this version, both sides start with 30 units.

The game started off slowly as I built up my undead army and slowly made my way towards the front porch. It took Jason and I a few rounds before we got the hang of of the overall gameplay. But once we did, it was a snap and loads and loads of fun.

Here you can see I’m getting closer and closer to the front porch and to finally be able to attack one of his pea shooter plants! 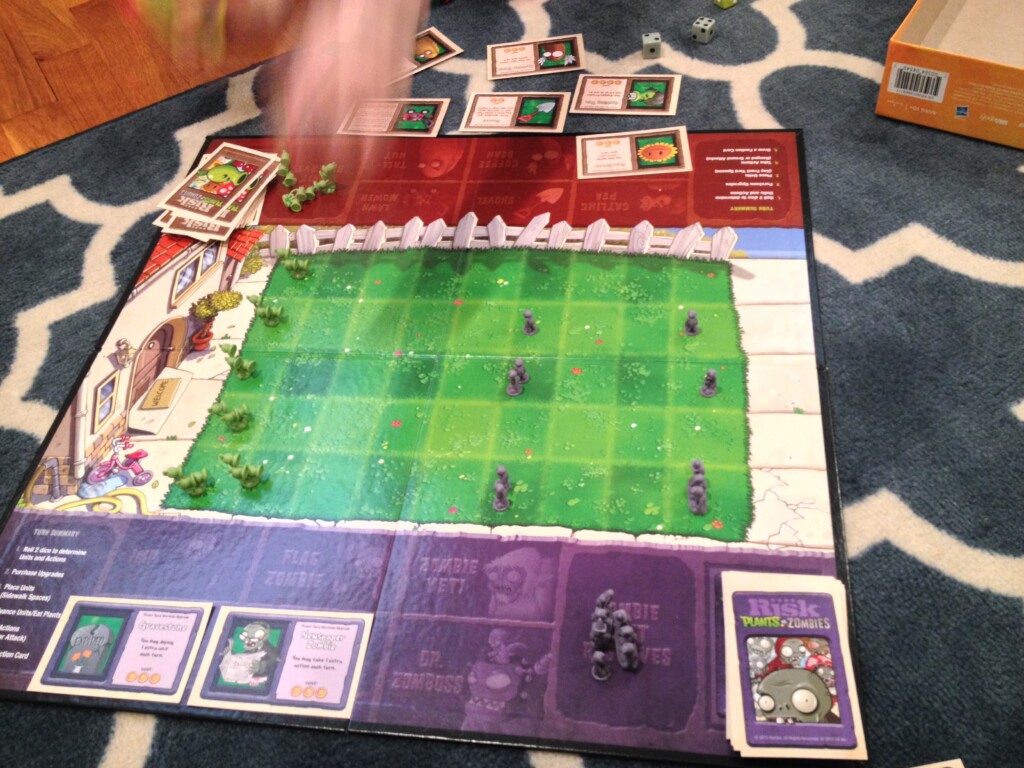 You can see that Jason’s been picking off my zombies one by one. I have some on the board and only a handful left in my reserves section on the bottom right of the board. But I’ve slowly been building up upgrades, like Newspaper Zombie who gives me an extra action each turn. Plus, I get to look at his underpants and laugh. 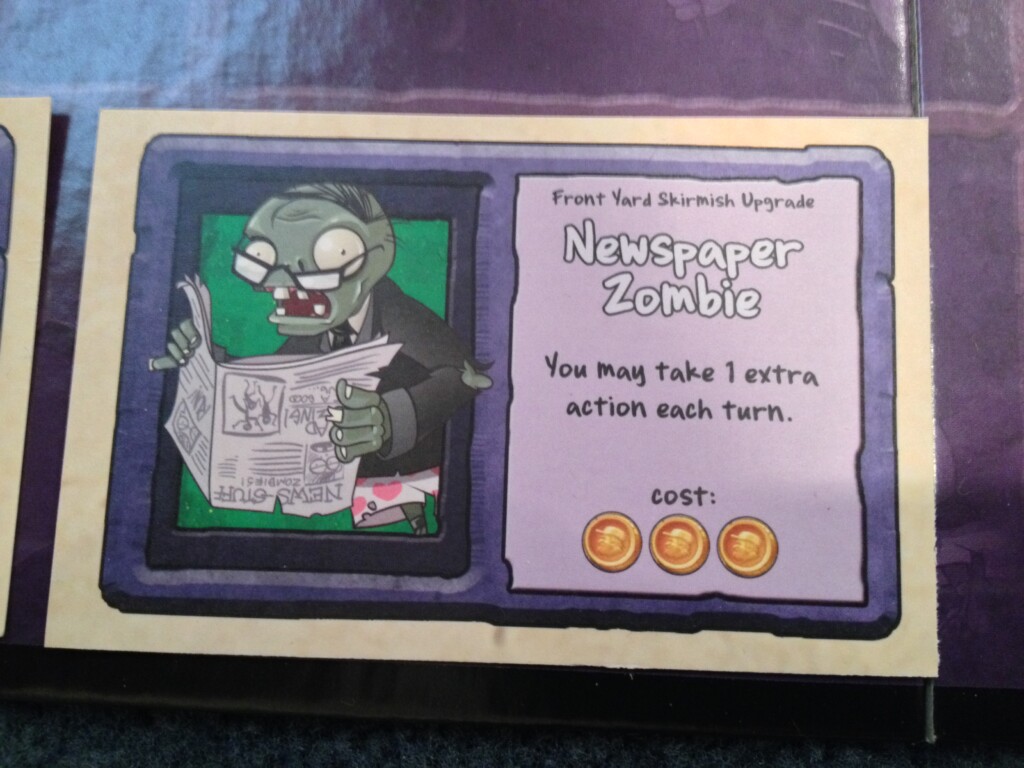 Of course Jason has his own upgrades and special abilities. Thankfully he never got the Shovel card or I would’ve been toast before the game even got going! 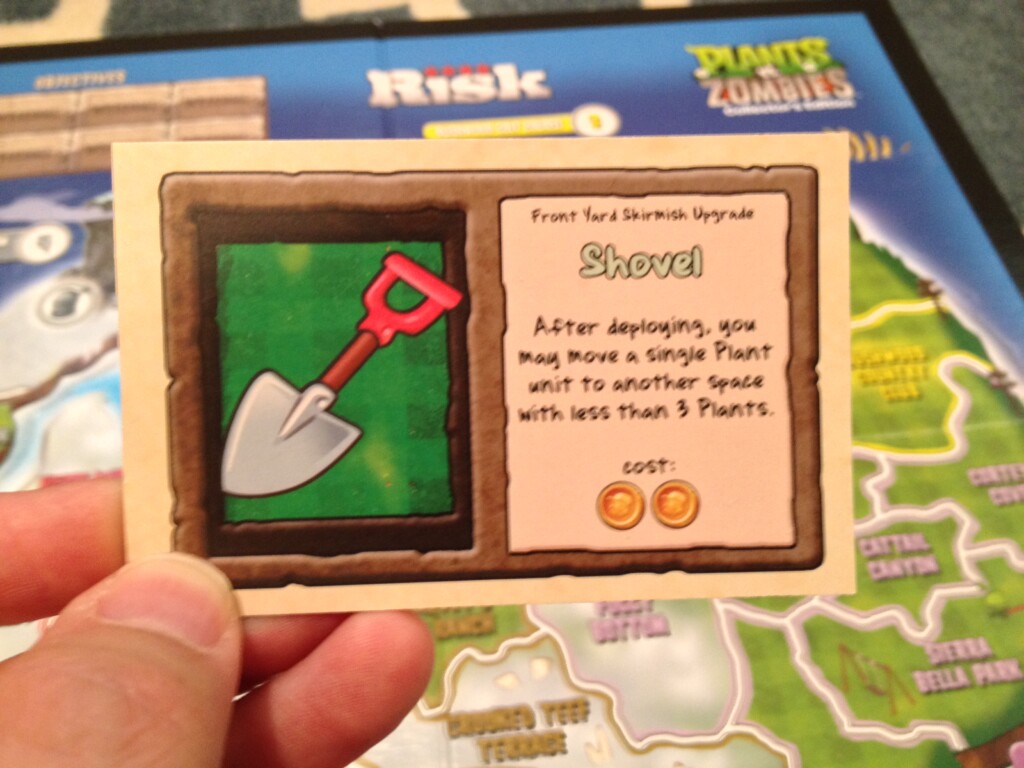 After losing most of my troops I FINALLY made it next to one of his pea shooters. That means a ground attack! Just like RISK, it comes down to the roll of the dice. Or in this case, a one on one die roll! 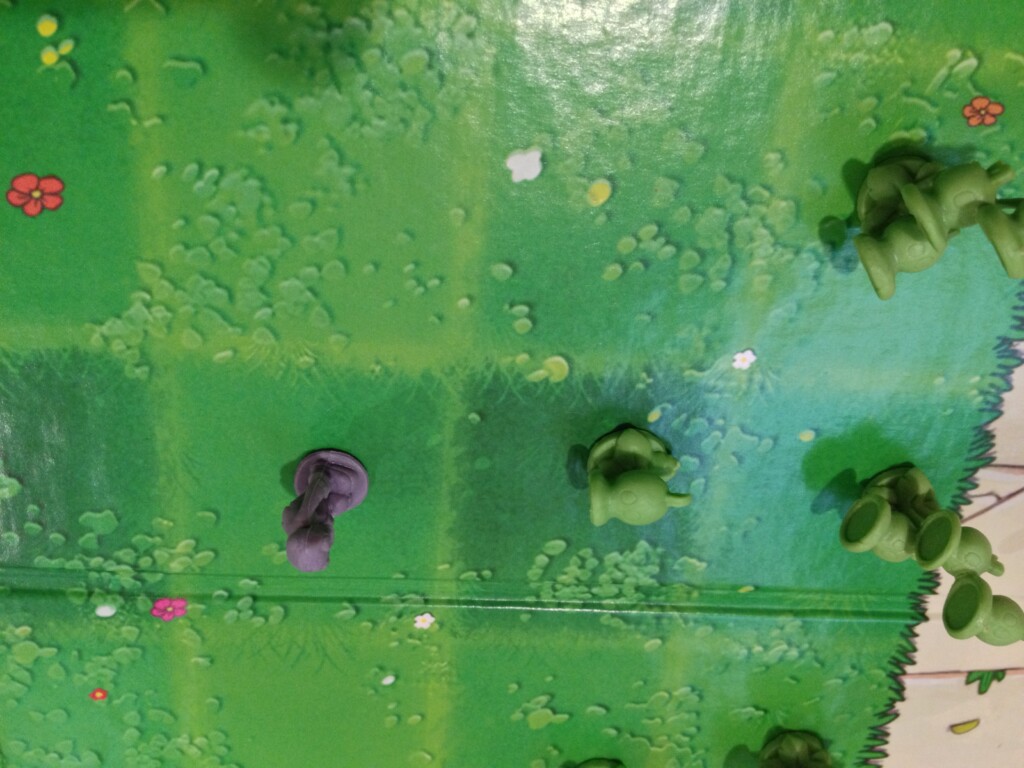 Bam! I actually beat him on this roll so bye bye, Pea Shooter, and hello last space before the front porch! Unfortunately, on Jason’s turn, his Threepeater blew me away.

In fact, for most of the game, Jason was knocking me off one zombie at a time. Ultimately, it came down to one last, lone zombie against more than a dozen plants. Jason clearly kept his emotions in check at this point. 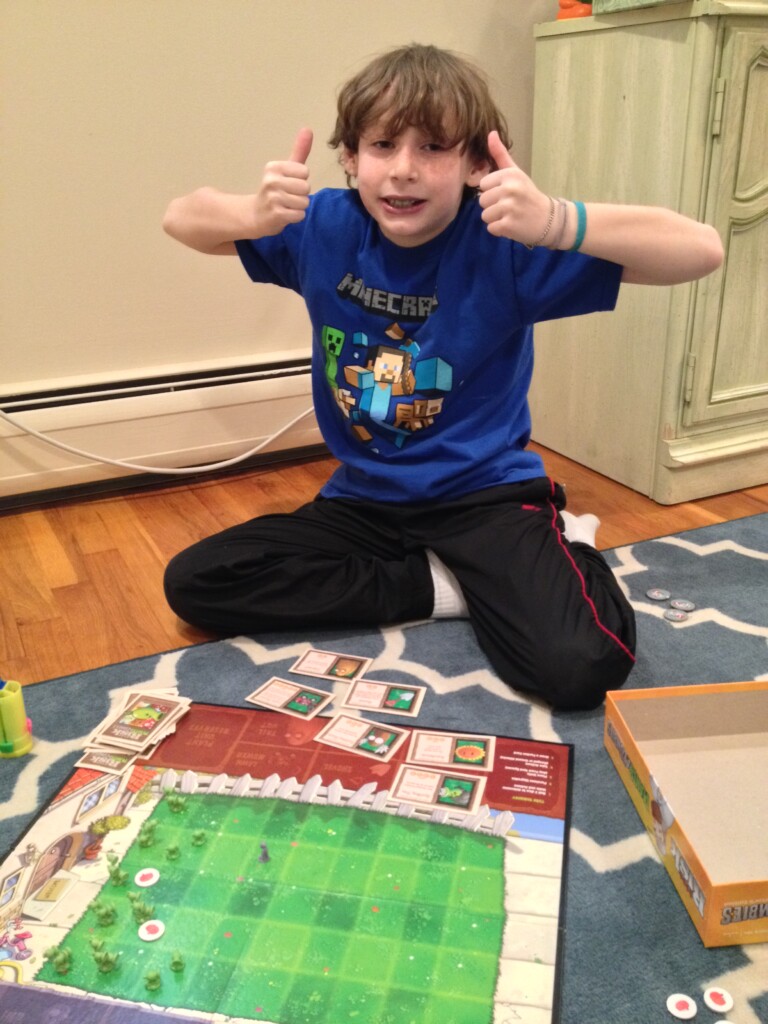 And yeah, it didn’t take long before he wiped me out for good. So sad.

This Front Yard Skirmish Mode was a total pea-shooting blast! It really does an awesome job of mixing the PvZ gameplay with the battle style of RISK. There’s certainly strategy involved too in terms of where to place your troops, how to maneuver them and when to upgrade cards and use special abilities. Same goes for the regular RISK style game on the flip side. Can’t wait to play that one next!

This completely customized take on two-player RISK offers a double-sided gameboard and three head-to-head ways to play: Tower Defense, Mission Objective, or Total Domination. With a detailed map of the original town of Brainsborough on one side and the familiar Plants vs. Zombies backyard from the video game on the other, players opt to be plants or zombies and then pick their battlefield. Fighting for their very survival, players engage in skirmishes, battle for three different victory conditions, and play the classic RISK game mode, vying to take over the whole board.

In this mulchifying take on the traditional RISK game, armies have been replaced by Peashooters and Threepeaters who attempt to prevent the consumption of human brains everywhere by the ever-approaching Brown Coat Zombies and Zombie Mobs. The 2-player RISK: Plants vs. Zombies Collector’s game is for ages 10+ at a suggested retail price of $29.99. It is available now at PvZStore.com and Amazon, and will arrive shortly at Kohl’s, Go! Games, ThinkGeek and other North American specialty retailers.

If you’re a fan of RISK or of Plants vs. Zombies, well, why are you still reading this? Go buy this crazy, cool awesome collector’s edition now! Lots of licensed games are nothing more than a slight name and graphics change. This bad boy, however, is a complete overhaul from brain to pinky toe bone!

The rules can be a little complex, so if you have younger kids (under 10) who love the video game but never played RISK, you definitely will need to sit down and play a few games with them to really understand it. But seriously, hats off to Hasbro, USAopoly and PopCap for putting together a truly fun and interactive mashup that works perfectly for adults as well as kids!

I may’ve gone a little overboard, though. I probably should’ve stopped Jason from playing so much because, well, see for yourself… 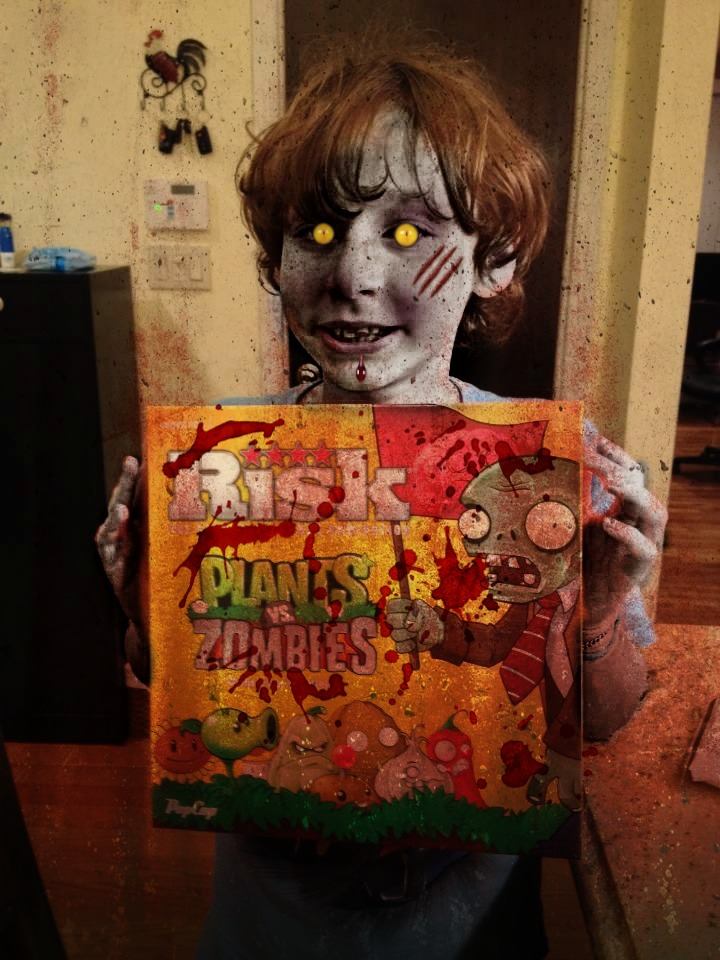 Giveaway ends on November 5, 2013 at 11:59 p.m. The 1 winner will be chosen at random and announced on this site. Giveaway is open only to legal residents of the fifty (50) United States (including District of Columbia), who are at least eighteen (18) years old at the time of entry. The 1 Winner will be notified by email and has 48 hours to respond or a new winner will be chosen.