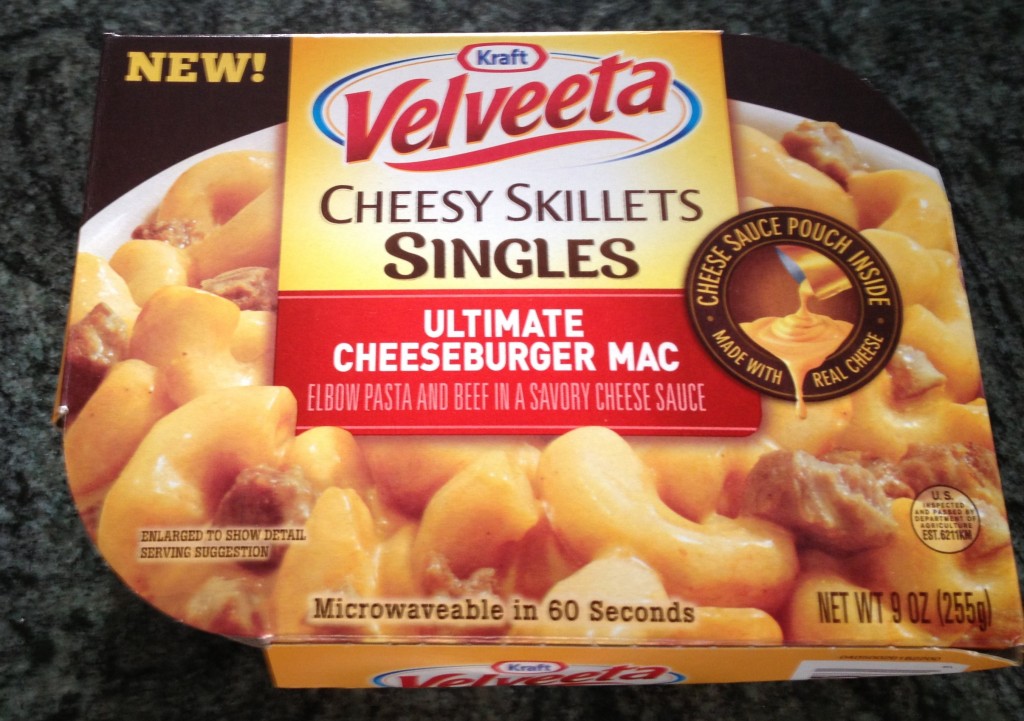 Clearly Velveeta has been talking to my wife. How else could you explain why the company’s new line of Skillet Singles is perfectly made for me? Let me explain…

I’m not allowed to cook rice in my house. Let’s get that out of the way right from the get go.

It’s not a religious thing. Uncle Ben’s doesn’t have a restraining order against me. It’s just a house rule put in place by my wife.

Let’s just say anytime I’m involved in any possible way with making rice, it results in us buying a new pot. And making something else for dinner.

So yeah, I’m not the best cook on the planet. I’m not completely hopeless, though. I can grill a mean turkey burger and fry up a great pizza omelette. Oh, and nobody but nobody pours a bowl of Cap’n Crunch like this dad!

Anyways, when my wife’s out for the night and I’m on my own for dinner, I’ll either grab something on the way home or more likely than not, I’ll just heat up some leftover pizza from the freezer. Pretty sad, I know.

That’s why I couldn’t pass up the opportunity when I was offered the chance to try Velveeta’s new Cheesy Skillet Singles. They’re a manly meal made for men. Big portions. Big Taste. Little cooking. Sounds like my kind of meal!

I packed up the troops in the Minivan of Justice and headed to our local Walmart to hunt down the mouth-watering answer to my future dining experiences. We had quite the adventure at Walmart, let me tell you. (For a full photo shoppertunity, check out my Google+ photo album!)

The roller-coaster experience went from a high of finding Velveeta Cheesy Skillets to a low of realizing they weren’t the microwavable meal Skillet Singles. Dejected and ready to rollback myself into a fetal position and cry myself to sleep in the corner of the store by the express lane, my adventures bounced right back up as we spotted a huge display of Skillet Singles by the front of the store!

After a quick Happy Dance (and some real confused looks from customers), I purchased one of each flavor and raced home to throw my mouth a party!

Velveeta’s Skillet Singles come in some pretty tastetastic-sounding flavors, let me tell you. There’s Ultimate Cheeseburger Mac, Chicken Alfredo, Chicken Chili Cheese Mac, and Lasagna with Meat Sauce. Against every fiber of my being, I held off cooking all four at once and devouring them. Instead, I closed my eyes and grabbed one at random.

Ultimate Cheeseburger was the lucky winner. Or loser if you consider I was about to end its existence by tossing it down my gullet. 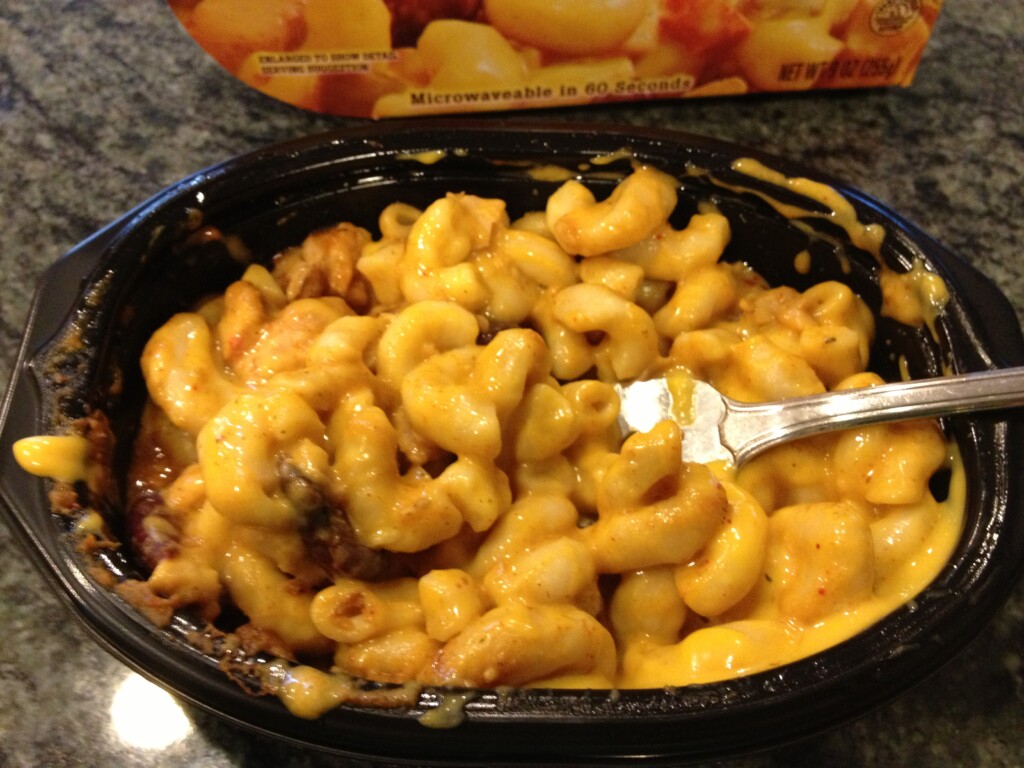 Now, I’ve made mac and cheese for my kids before. Both on the stove top (yes, I’m allowed) and in the microwave. It’s not that difficult, yet I still have to read the instructions every single time.

Well, let me tell you that these Skillet Singles are 100% made for men. The directions are as follows:

So okay, there’s just no way this thing is gonna be cooked or even taste that good. I’m not the biggest mac and cheese fan after all. I like it, but usually just as a side dish. Cheeseburgers, however, I can get down with.

After giving the cooked meal a quick stir, I grabbed a drink and sat down in front of the TV to stuff my face while watching the Yankees throw away another potential victory. (Quiet down, Boston fans. I hear ya. I hear ya.)

The ultimate test is, obviously, the taste. I was already massively impressed with how incredibly easy this thing was to cook. But if it tasted like sawdust, well, let’s just say my overall impression would actually go down. Yes, I do have some standards.

Guess what. The Ultimate Cheeseburger Skillet Singles wasn’t really good. It was actually really, really, really great! I don’t know how Velveeta did it, but this sucker really did taste like a cheeseburger transformed into a different shape.

I finished the whole thing no problem. There’s definitely a decent amount of food and while I probably could’ve eaten another whole bowl, this would’ve been just about the right amount for me to eat at lunch. Except then I would’ve had to fend off the salivating hordes of co-workers.

Anyways, I would 100% eat the Ultimate Cheeseburger Skillet Single again if my wife (hear that, honey?) picks up a few more boxes. As for the others, they were all just as easy to make. 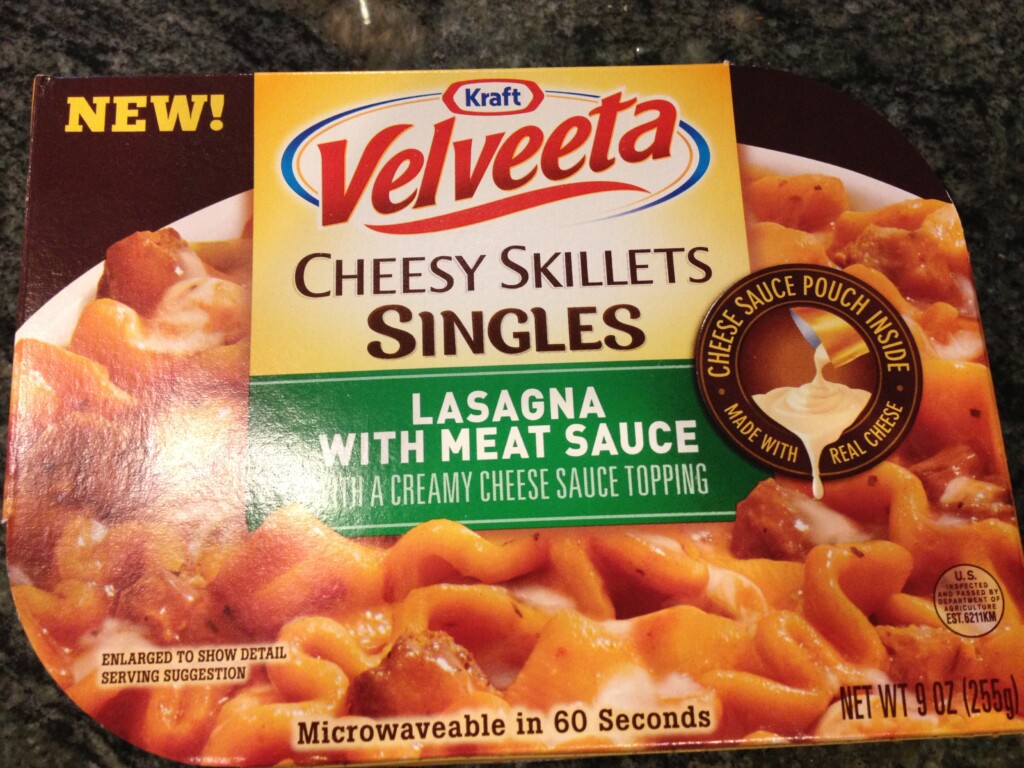 The Lasagna with Meat Sauce was my next challenge. It was interesting to see it come with a white cheese sauce rather than the Liquid Gold like the Cheeseburger one had. I guess it’s more mozzarella-like. After following the simple 4-Step cooking plan, here’ s what my lunch looked like: 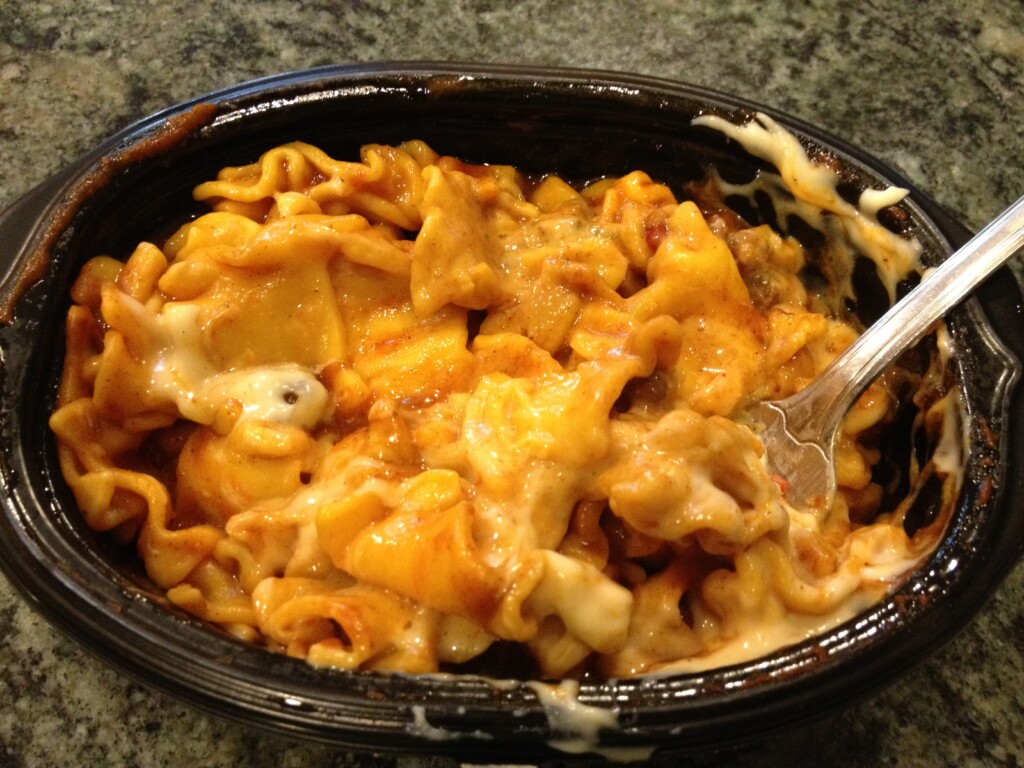 And now comes the taste test. Could it hold up to the standards of the Ultimate Cheeseburger Mac? Let’s find out! (Super reader bonus: You even get a peek into our pantry!) 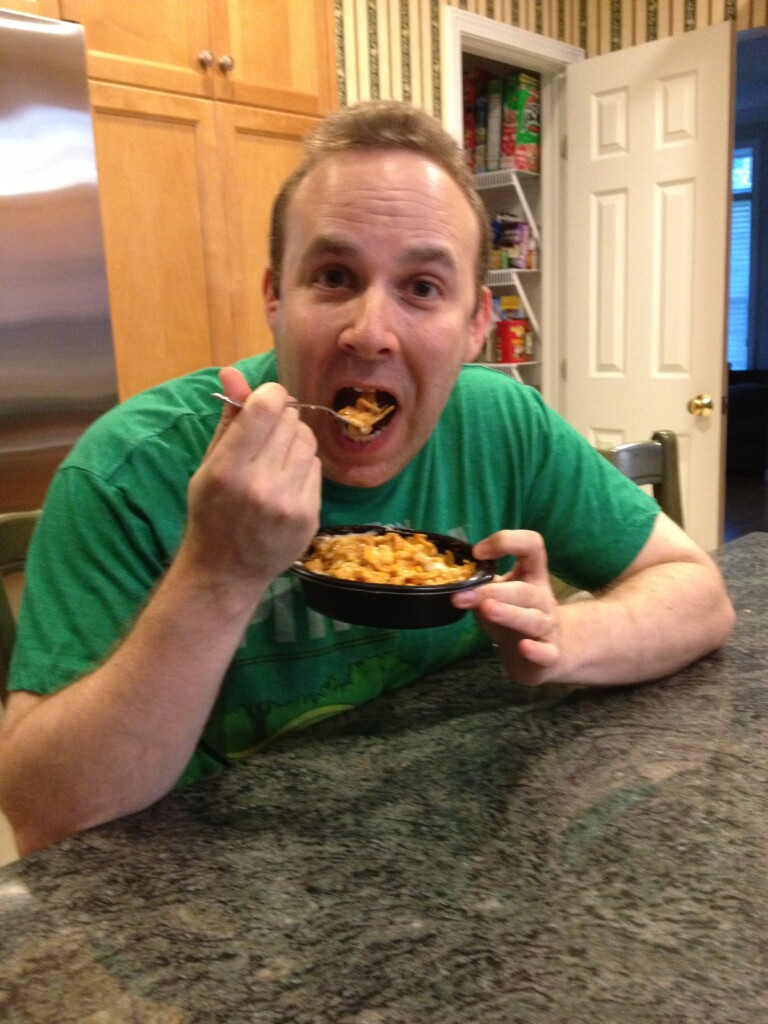 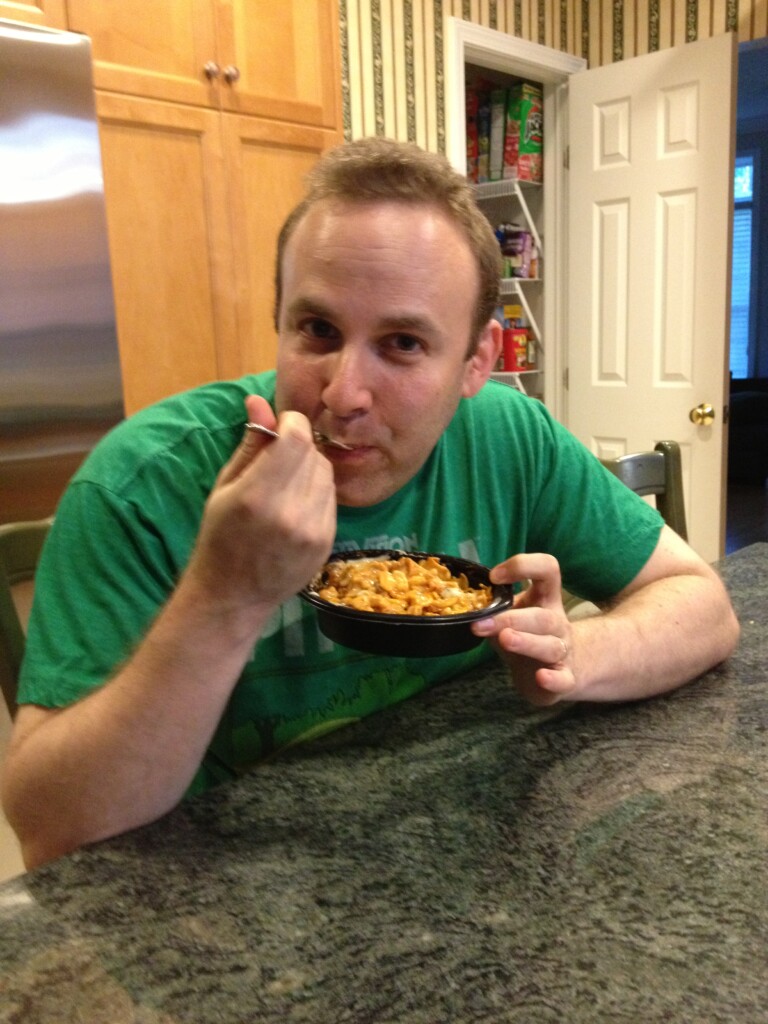 After successfully navigating the fork into my mouth, I chewed a beat and instantly made a taste decision! 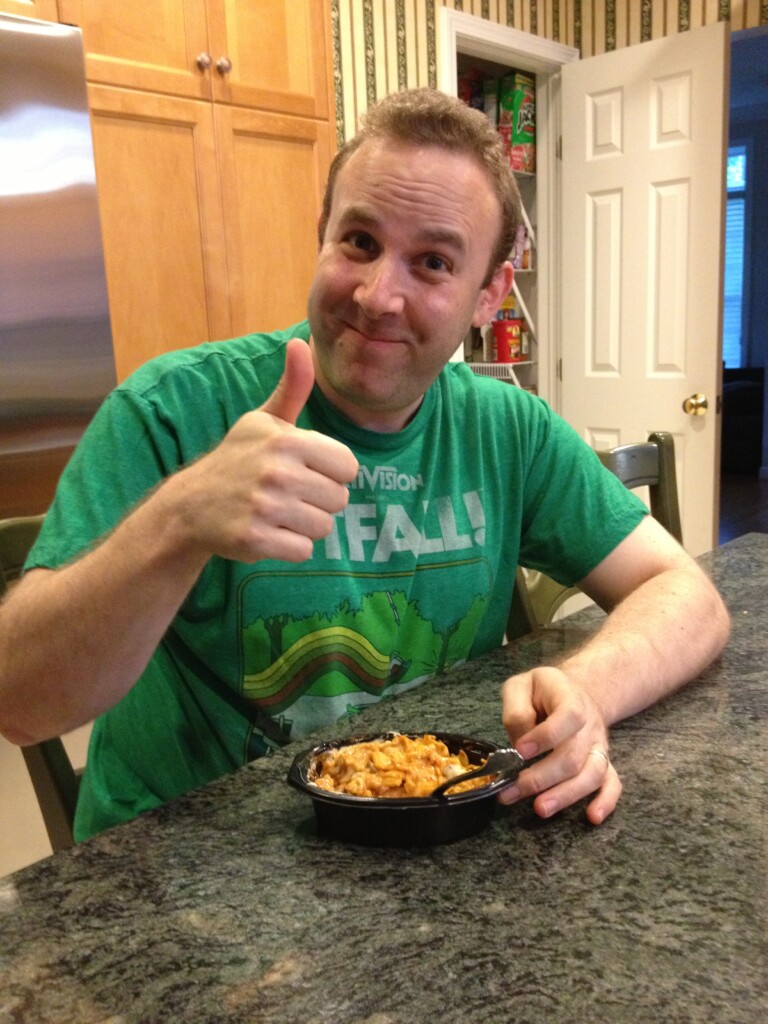 Score! Lasagna was super tasty as well! At this point, I’m real proud of my cooking abilities. 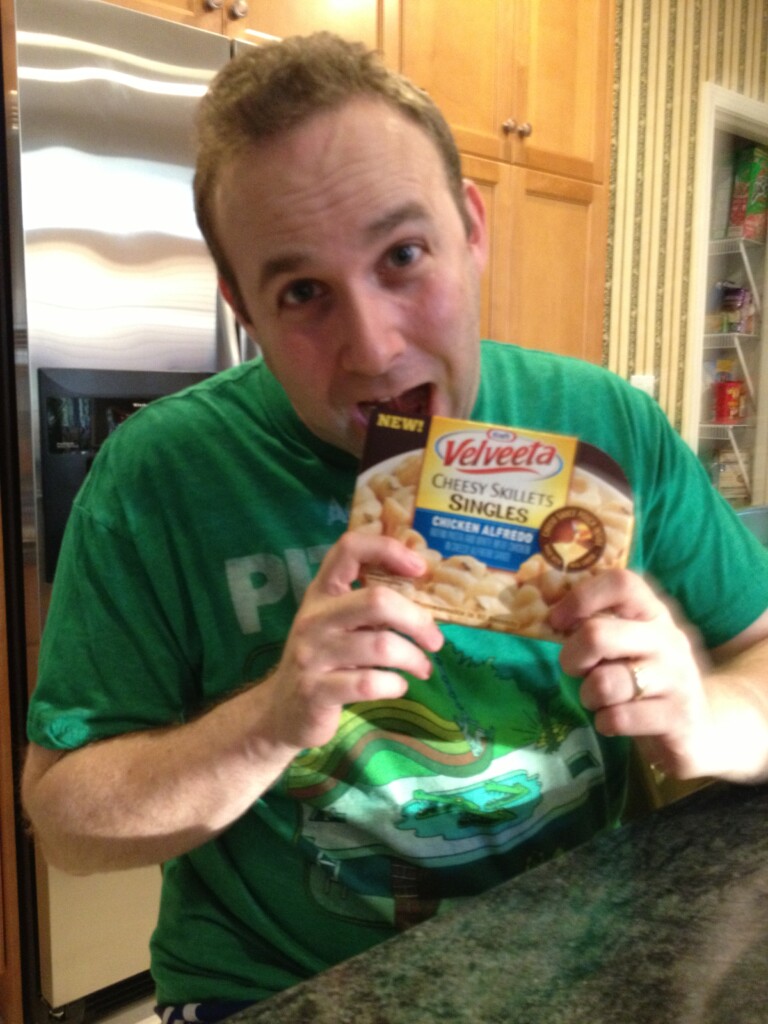 Surprisingly, the cardboard box wasn’t as nummy as I thought it’d be. Then I realized, people shouldn’t eat cardboard. So I opened the box and cooked it magically in the microwave. 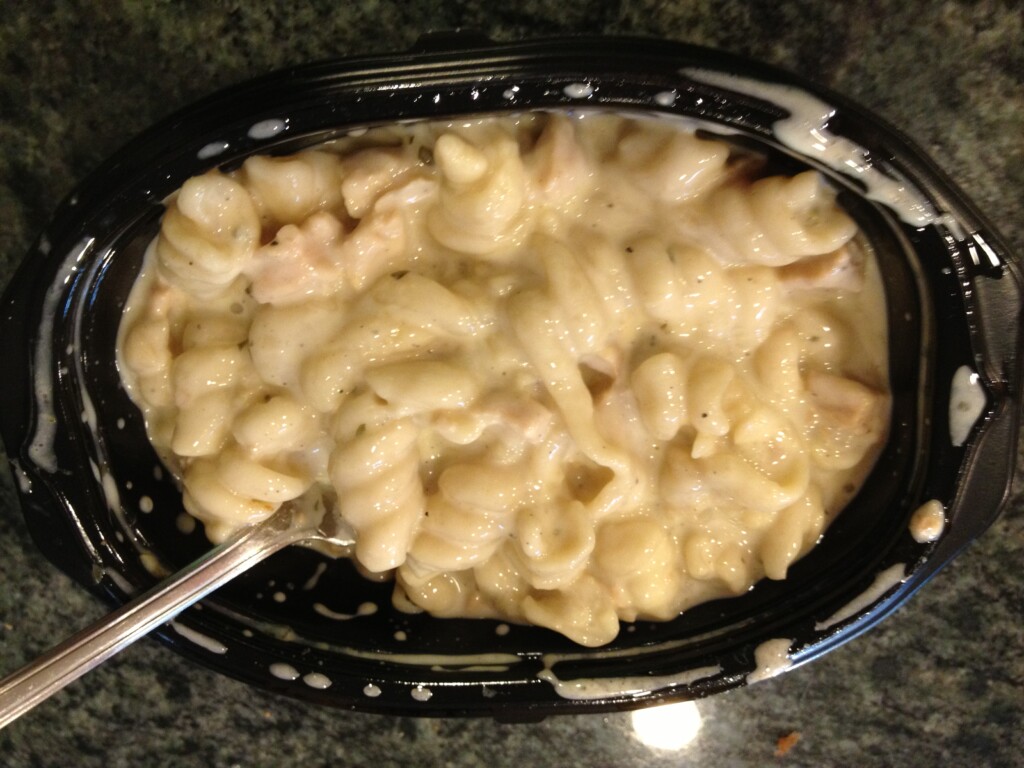 To be honest, I didn’t love the Chicken Alfredo. (Sorry, Velveeta!) I’d certainly eat it though and it didn’t taste bad, I’m just not really a fan of Alfredo sauce to begin with. I know, I know. I’m nuts. It’s probably my wife’s favorite pasta dish. Like I said, it wasn’t bad, it’s just not something I normally like eating anyways. If you like Alfredo sauce, however, chances are you’ll dig this one. 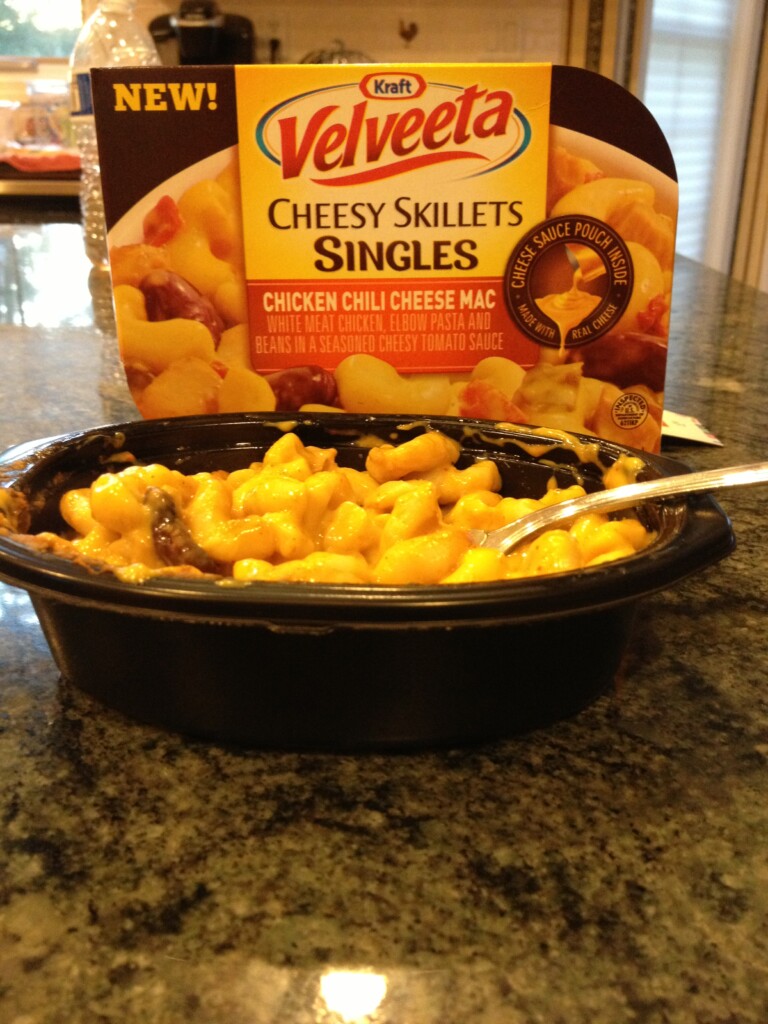 The Chicken Chili Cheese Mac is as much fun to eat as it is to say. Go ahead, say it. Fun, right? This one was as good as the Lasagna, with a nice Mexican kick to it. Es muy bueno!

Anyways, I don’t need to tell you that I’m hooked on Velveeta Cheesy Skillets Singles. You don’t need to freeze them, they take just one minute to cook and they taste scrum-deli-icious! Try them today and if you were smart, you clipped the $1 off coupon for Velveeta Skillet Singles that was in the coupon inserts of July 18 newspapers nationwide. If not, well, trust me, they’re worth that extra dollar!