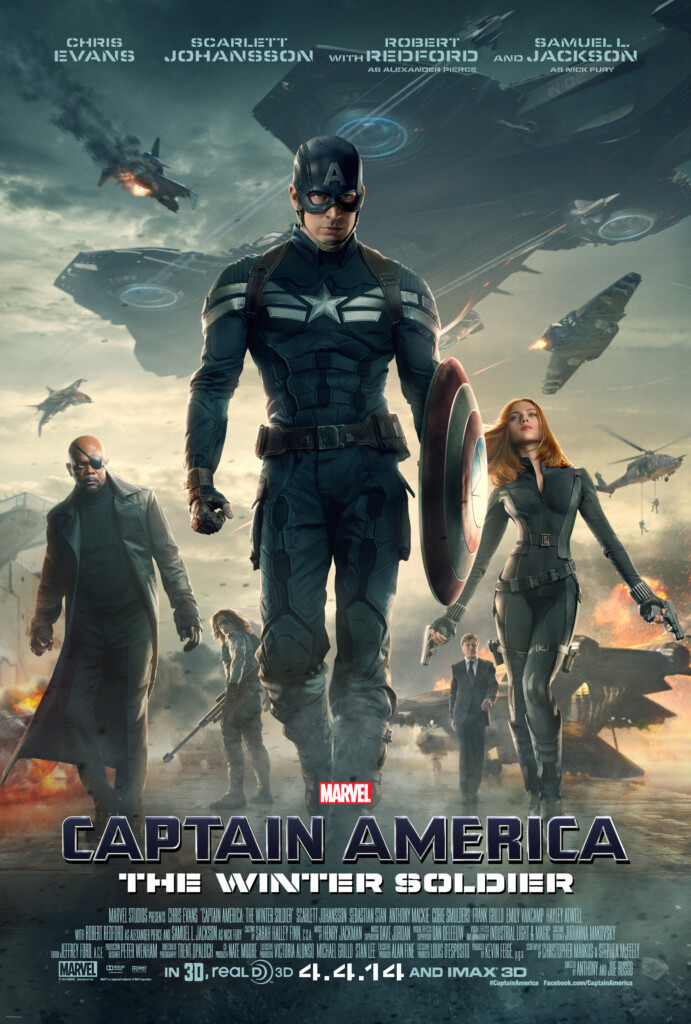 Last month I ventured on the trip of a lifetime. Thanks to this here little daddy blog, I was invited by Disney to go on a blogging expedition full of insane awesomeness.

In one short trip, I screened the new Muppets Most Wanted movie, as well as attended the movie’s Red Carpet Premiere at the El Capitan Theatre, followed by the celebrity-filled after party. I interviewed the producer, songwriter and even Kermit & Miss Piggy themselves! I screened other Disney films including The Pirate Fairy and Bears, in addition to interviewing the amazing talent behind them both.

Those were all fantastic (especially meeting Kermit in person!), but I’m a lifelong Captain America fan, so the Living Legend portion of the trip was what I was most excited about. Yes, we were involved in tons of up-close-and-personal interviews with the film’s stars, directors and producer. Chris Evans. Scarlett Johanssen. Anthony Mackie. It was all pretty surreal and amazing.

But despite all of that (yes, even meeting my celeb crush Scarlett), the #1 most anticipated part of the entire trip was seeing an early screening of Captain America: The Winter Soldier.

With that much of a build up, you’d think there’s no way this movie could possibly live up to my expectations. And, well… it didn’t. Actually, it far exceeded them!

I could write a lengthy post about why this movie made me grin from ear to ear, but I’ll save that for down the road. I don’t want to include any spoilers at all in this review.

First, my super short review: Everything is awesome. Though this is even awesomer!

My slightly longer review: I know this will start a fanboy gangwar across the Web-o-sphere but I 100% believe it… Captain America: The Winter Soldier has surpassed The Avengers as the Greatest Comic Book Movie Ever Made. Period.

With that kind of endorsement I need some support now, don’t I? Okay, let me back things up, which leads into my full-fledge movie review. First off, for any of you who complained that there just wasn’t enough action in the first Cap film, The Winter Soldier laughs in your face. We’re talking loads of hand-to-hand fighting, car chases, gun fights, shield-slinging and more. Heck, I think even Bruce Willis’ “Die Hard” series had more quiet moments.

But Winter Soldier is so much more than just a fantastic action film. At its heart, it’s an intelligent, thought-provoking espionage thriller. Steve Rogers is from a simpler time. A time where you could easily separate good from evil. Today, however, we live in a society that’s very much gray. And when it comes to giving up certain freedoms for the good of the country, that’s just something Cap has trouble getting behind. And therein lies his biggest fight throughout the film.

What I really love about The Winter Soldier is that we get to really see Chris Evans shine. in Captain America: The First Avenger, we spent the majority of the film in the 1940s, as the origin of Captain America slowly unfolded. Through a few montages and fight scenes we got to see him in action, but that was about it. In The Avengers, we saw him quickly step up to a leadership role, but again, the bulk of that film was setting up the team dynamic. So now, in The Winter Soldier, we finally get a movie all about Cap.

Chris Evans must’ve been born with a silver shield in his mouth, because this guy lives and breathes Captain America. Whether in costume or street clothes, he continues to embody the strong noble beliefs that have always been at the center of his character. Normally the ultimate flag-wearing Boy Scout would be a bit tough to swallow, but Evans does such a remarkable job with it, that you honestly believe this guy’s running around as a living breathing Super-Soldier.

The rest of the cast is just stellar too. When I first saw shots of The Falcon, I’ll admit I groaned. Where was his classic spandex costume from the comics? I half expected to despise this new sidekick, but I was more than pleasantly surprised. Mark my words, The Winter Soldier is going to make Anthony Mackie a household name. This guy clicked so well with Chris Evans that I actually wanted to see even more of Cap and the Falcon in action!

As for Nick Fury and the Black Widow, they actually get some real decent air time in this film and it’s nice to see Samuel Jackson and Scarlett Johanssen add even more depth to these two. Widow, especially, shows off a really playful and fun side to her personality, all while mopping up the floor with bad guys.

And of course, there’s The Winter Soldier himself. Not much to say here except that he looks really cool, walks really cool, talks really cool and, well, is just one cool, calm villain. I was curious how the movie was going to handle his backstory and Marvel Studios did a fabulous job of breathing new life into this guy.

There’s soooo much more I can say about Captain America: The Winter Soldier, but like I said, I don’t want to give any spoilers. Let’s just say that some big events happen that will definitely impact the entire Marvel Film Universe, as well as ABC’s Agents of S.H.I.E.L.D. series!

Great acting, fantastic story and loads of non-stop action. Yep, The Winter Soldier isn’t just a great comic book movie, it’s also a fantastic movie in general. I admit, absolutely nothing was cooler to me than seeing Cap, Thor, Iron Man, Hulk, Hawkeye and Black Widow standing back-to-back in a circle in the middle of NYC, fighting off a seemingly unstoppable alien army in The Avengers. That one scene alone still gives this fanboy goosebumps.

I loved The Avengers. I can watch it every single day and never get bored of seeing it. It’s an incredible comic book movie that I never in a million years would’ve ever thought possible. But Captain America: The Winter Soldier is just better. It may not have the full roster of heroes, but the acting and storyline are just on a whole new level.

The only downside to The Winter Soldier? The fact that the second it ended, I was screaming for more. For now, I’ll just have to settle for watching it again. And again.

Extra Credit: Trust me, you’ll definitely want to stay through the entire credits for a pair of super cool bonus scenes.